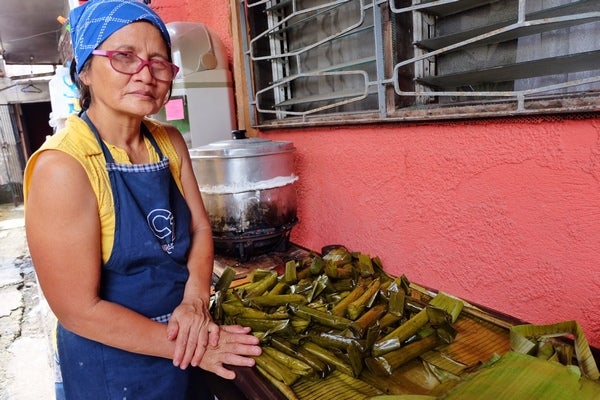 Dulce Gamotan, a Commerce graduate, has found her true calling – making and selling in Cebu the popular delicacies of Leyte.

When her husband died in 2001, Dulce Retulla Gamotan thought of utilizing her skill in making native rice delicacies to provide for her three sons.
Dulce’s husband, Vergilio Sr., died at 43 years old after 16 years of battling diabetes.

“I started with P1,000 as capital which was from donations of people during my husband’s wake,” said Dulce, now 60 years old.

She made budbud balanghoy, a rice cake made of grated cassava, brown sugar, coconut strips and coconut milk, and sold this in the school canteen in Barangay Poblacion, Hilongos, Leyte.

It was from the earnings from her kakanin business that put food on the table and later sent the three boys to school.

Dulce studied at Hilongos National Vocational School and learned to make kakanin or rice delicacies when she was 14 years old.

Kakanin comes from two Tagalog words: “kain” (to eat) and “ kanin” (rice). It is a general term used to refer to any sweet delicacies made of rice.

“We had a subject called food trade and we were taught how to bake and cook,” she told Cebu Daily News.

Dulce’s parents were both teachers. Her mother Cresolina was an elementary school teacher. Her father, Celedonio, taught in high school.

At home, where she was the third child among 10 siblings, Dulce learned how to properly cook and wrap budbud. Her father was strict and made sure they learned how to do house work.

Dulce moved to Cebu to study in college.

She finished a degree in Commerce major in Accounting from the University of San Jose Recoletos and went on to work for Dino Enterprises doing inventory and stocking responsibilities.

While her husband worked as a seafarer, Dulce continued working in barangay Opao, Mandaue City. The family rented an apartment in Barangay Zapatera, Cebu City.

“But I did not like it that my children were growing up and I was not always there to take care of them so I decided to quit my job,” she recalled.

Around the same time, her husband was already weak from his illness so the family moved back to Hilongos where they were surrounded with family members. 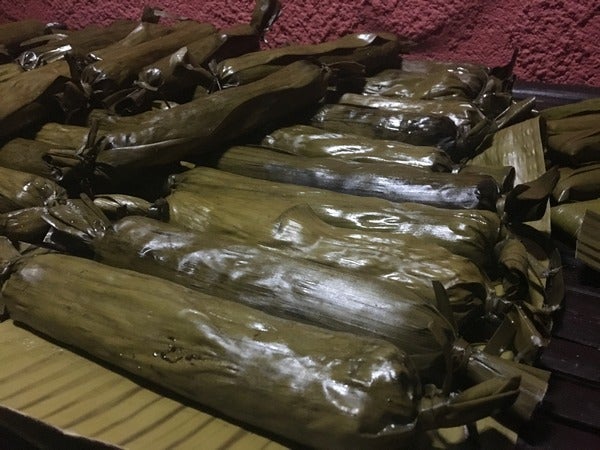 Dulce lived in Hilongos until 2012 when she moved back to Cebu as her youngest son, John Duver, entered Cebu City National Science High School.

In Cebu, Dulce made occasional orders for friends and neighbors. She also lets other vendors sell her products. She sells a piece of budbud for P5 and the vendors resell this at P6 or P7.

Many of them just get the products early in the morning without paying for them. The agreement is to pay her by day’s end when the products are sold.

But in many instances, Dulce never gets paid.

Despite the breach of trust, she does not harbor ill feelings for these people.

But her eldest son advised her to professionalize the business if she wants to earn from it.

With her newfound skill in navigating the world of Facebook, Dulce and her son set up “Dulce’s Kakanin” where they now receive orders online.

Most of these delicacies are famous in Hilongos and Dulce is more than happy to share them to Cebuanos.

The bestsellers are moron and budbud Magsaysay, which is glutinous rice cooked in coconut milk and sugar and stuffed with native chocolate in semi-liquid form.

Each piece is sold between P8 to P50.

They require minimum orders depending on the products.

“Ang ako ra man gyud gusto aning negosyoha kay makabaligya ug maka-ginansya nga igo makagasto-gasto diri sa balay. Lain man pud kaayo nga magpuyo ra ko,” she said. (What I just want in this business is to be able to sell and earn enough profit to buy essentials. I do not like to be stagnant and not do anything.)

The raw ingredients are all bought at the Carbon Public Market. Dulce wakes up as early as 3 a.m. to start cooking.

Her work station is in the house in La Paloma Subdivision in Barangay Tisa, Cebu City, where the family currently lives.

The products are delivered through a motorcycle-hailing app.

While Dulce has been making rice delicacies for 46 years, it was only this year that she learned that orders can come from complete strangers who happened to stumble upon their social media page.

In the long run, the dream is to professionalize the business and have her children take over. Her eldest son is keen in turning this dream into a real venture.

But for now, Dulce said she needs to focus on writing the recipes down.

“Everything is in my head. I will get around it soon,” she said while busy wrapping the next batch of orders in banana leaves.