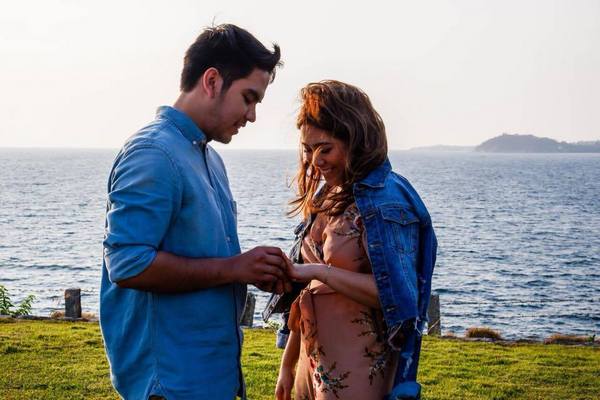 SINGER Moira Dela Torre and her musician-boyfriend Jason Marvin are taking their relationship to the next level.

This after they pulled a surprise for their fans last Sunday during an episode of Gandang Gabi Vice (GGV).

What appeared to be the debut showing of the music video for her latest single “Tagpuan,” turned out to a wedding proposal.

Unknown to Dela Torre, Marvin and Prats, who directed the video were cooking up a surprise for her.

He said they started out as friends for seven years, became best friends for three years before becoming a
couple.

Known for her “hugot” and sad songs, Dela Torre said “Tagpuan” is close to her heart since it describes her life.

Dela Torre’s parents were separated when was three years old.

She reunited with her father last August in San Francisco, California.

The music video shows a young girl and her father, mirroring the life of Dela Torre.

It is towards the end of the music video when the proposal happens.

It shows the two lovers on a cliff with a perfect view of the sunset.

Dela Torre gets surprised when Marvin takes out a black ring box tied with a white lace from his pocket.

Marvin slowly opens the box, shows the engagement ring, and kneels down before Dela Torre.

He then asks her, “Will you marry me?”

The 24-year-old singer nods her head and gets a tight hug from her fiance.

Announcing their engagement on her Facebook account, Dela Torre posted: On a cliff at sunset, my best friend asked me the easiest question I have ever had to answer. I love you 2048: Jason.”

Marvin also posted on his Facebook account: “All my life I’ve been searching for “the one,” not knowing that she’s been my bestfriend all along. I love you forever, my Momoi.”