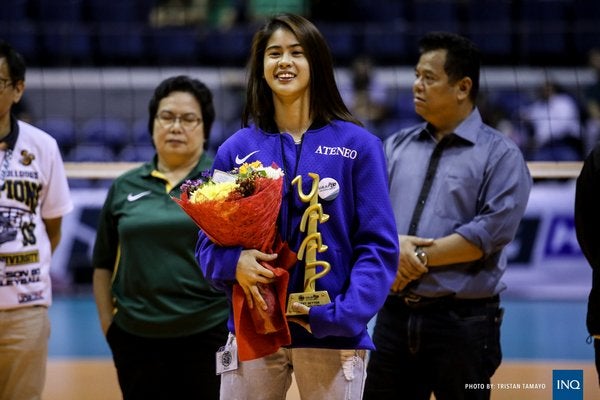 FAR EASTERN University needed a comeback to stay alive in the title series, but the only rally came from defending champion La Salle.

The Lady Spikers completed a stunning opening set fightback en route to a 26-24, 25-20, 26-24, win in Game 2 to claim a third straight championship in the UAAP women’s volleyball tournament.

La Salle needed only three sets to win but the Lady Spikers had to survive two grueling sets just to put away the Lady Tamaraws.

“We thought it was over during the last part of the third set, but I told them not to celebrate yet because the fight is still far from over,” said DLSU head coach Ramil De Jesus, who is responsible for all of La Salle’s 11 women’s volleyball titles, in Filipino. “FEU just doesn’t give up.”

FEU pulled even at 24 after trailing, 20-24, and by as much as seven, 12-19, in the third set before La Salle responded with a Kianna Dy drop and Tin Tiamzon hit.

Down, 24-21, the Lady Spikers saved three set points before Dy put the exclamation point with back-to-back emphatic hits to end the first set.