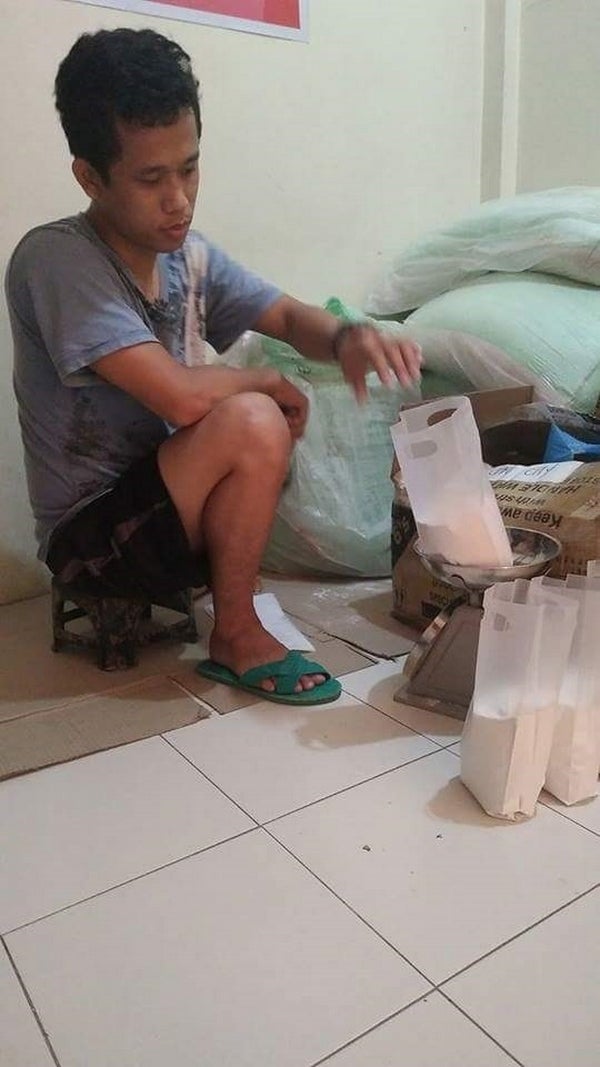 Riezynn Harvey Isiderio, 26, who is from Agusan del Norte, said that he ventured into the business not only to earn but also to have the funds when he would decide to take the nursing board examinations.

Isiderio, however, said that this was his second attempt in going into this venture.

His first attempt at repackaging and reselling detergent powder and fabric conditioner lasted for only two months in early 2016.

He said that he was not ready then because he still had not enough know how on making detergent powder and fabric conditioner.

With the failed business and losing his P4,000 capital with it, Isiderio decided to work for his aunt who is a distributor of surplus or excess products from a factory.

The excess household products such as detergent powder and fabric conditioner would be bid out and his aunt would buy it. They bought sacks and gallons and they would repackage and resell it online for a lower price.

Amid all this, he continued to dream of making good in this kind of business.

So while he sold for his aunt, he also studied on how to make detergent and fabric conditioner and on how to venture and engage in the business of powders.

There were a lot of trials and errors before he got the right mix.

So in November 2017, Isiderio decided to give the detergent powder and fabric conditioner business another try.

He started marketing his products to his friends and peers at his church.

At first, it was difficult to sell them because his friends and churchmates doubted the products.

He said they would often ask if the products could be bubbly enough to wash away the stains on clothes.

But eventually, after trying his products, he was able to win over more customers.

In five months time, through his personal marketing efforts and through his online marketing, Isiderio now sells two boxes of detergent powder and 20 bottles of fabric conditioner depending on the reseller or customer.

In that span of time, he has also at least 10 resellers of his products and at least 100 customers.

His aunt, who mentored him in the business, said she is proud of him. He thought that it would not be that successful though.

“Expertise? I don’t have that actually. I will always ask my aunt about it and she will guide me on what to do and what steps to take. Aside from that I also read books about it. It depends on how hardworking you are and the efforts you put in to do research to make what you are striving for possible,” he said in a mix of Cebuano and English.

“If you are willing to engage in business you need to find ways. There are many ways to start up your business — just don’t limit your way of thinking and also to be unique,” he said.

Minsey Lumangyao, 19, who started as a customer of Isiderio just two months ago, is now a reseller.

She said that she became a reseller after she tested the effectiveness and quality of the product.

Another reseller also attested to the quality of Isiderio’s products and with the lower price compared to others in the market, she has had many bulk orders since she became a reseller.

She also said that it was good for Isiderio to be hands on in his business because the orders would be delivered to them on time.

Isiderio, for his part, attributed his persistence and hard work to his parents, who are teachers in Agusan del Norte.

He said he was planning to someday have a factory of his own.

But for now, he is bent on growing his business so that he can earn and help his parents and resellers as well. / Bea Belle Redellosa, CNU Intern