DBP to contractors: Avail of ICONS 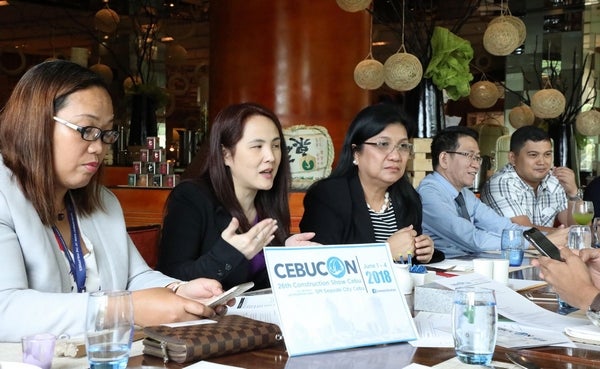 Jane Gocuan, senior vice president and group head of the Visayas Lending Group of the Development Bank of the Philippines (DBP) (second from left), discusses the lending program of the DBP for contractors to support the government’s build, build, build program during Tuesday’s press briefing for the 26th Cebu Construction Show on June 1, 2018 at the SM Seaside. Aside from DBP officials,Lilibeth Abais, managing director of LA Ducut and Company, who is an organizer of the event, was also present during the briefing at the Radisson Blu Cebu. CDN photo/Tonee DEspojo

In support to the administration’s Build Build Build thrust, state-owned Development Bank of the Philippines (DBP) is encouraging contractors to avail of their new loan facility for infrastructure projects.

Lawyer Marissa Anino, DBP assistant vice president and head of the Cebu Lending Center, said they also want more local contractors to avail of the program which has funded around P13 billion projects nationwide since it was started in 2017.

To promote the loan facility, the DBP is joining this year’s Construction Show Cebu (CEBUCON) for the first time.

“We are joining the show because this is a construction show. DBP, being the country’s infrastructure bank, wants to highlight our programs for contractors,” she said during a press conference for the show yesterday.

CEBUCON, which is now on its 26th year, is the pioneer building and construction exhibit in southern Philippines. Launched in 1993, it is the longest running exhibit of its kind in the south.

Nationally, the DBP has assisted a total of 133 contractors accredited by the Philippine Contractors Accreditation Board (PCAB) under the ICONS. This translates to around P13 billion worth of projects.

While they do not have specific data for Cebu, Anino said 41 percent of these projects come from provincial lending centers.

DBP wants even more contractors, especially in Cebu where there is continuing real estate boom, to avail of the program. It is available for both public and private infrastructure projects.

According to Jane Gocuan, senior vice president of DBP’s Development Lending Sector, the ICONS has two loaning components – one for projects based on a certain contract, and another to support a contractor’s capacity expansion through capital investment that may include acquiring heavy equipment.

Aside from the contractors who will be attending the CEBUCON, DBP is also encouraging other contractors to learn more about ICONS by visiting DBP’s lending centers in the Visayas, one of which is in Cebu. The others are in Bohol, Leyte, Negros, and Iloilo.

Average processing for the loan facility is 45 working days after submission of complete requirements. The bank also said they offer “competitive interest rates.”

The CEBUCON is annually organized by L.A. Ducut & Company, Inc. This year, CEBUCON will be held at SM Seaside City on June 1 to 4.

Lilibeth Abais, managing director of CEBUCON, said they wanted their participating exhibitors and attending contractors to also avail of the programs of the DBP.

Compared to when they first started where exhibitors are mostly companies from Manila, Abais noted that in recent years, there has been a good mix of Manila-based and local exhibitors joining the show.

Read Next
ONE LAST MISSION