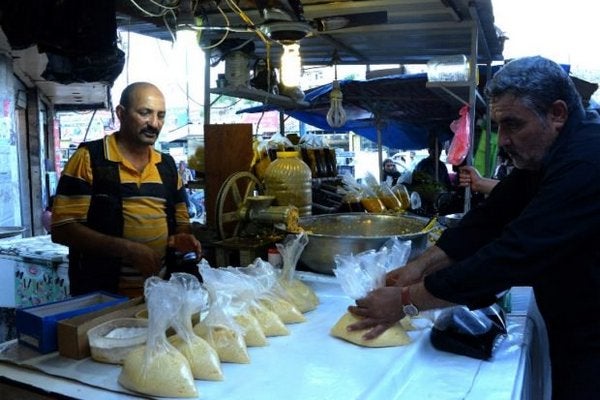 An Iraqi man buys food in an open air market after breaking the fast during the holy month of Ramadan in Mosul on May 24, 2018. /AFP

Under the cover of night in the Iraqi city of Mosul, Rayan and Ali break the silence by drumming to announce suhur, the pre-dawn breakfast during the holy month of Ramadan.

The Islamic State (IS) group which controlled the city for three years before its ouster last July had banned drumming, along with other Ramadan traditions that make up the festive spirit of the dawn-to-dusk fasting month.

But since this year’s Ramadan started in mid-May, Rayan Khalidi and Ali Mahboub have been doing their nighttime rounds, donning traditional keffiyeh headscarves and jalabiya robes.

The Ramadan drummers, known as “messaharati”, are “part of the religious and social heritage of Mosul”, the now war-battered city which has stood for centuries as a trading and cultural hub of the Middle East, said 25-year-old Rayan.

But the jihadists of IS decreed that such drumming was a sin, under their rigid interpretation of Islam enforced by its own courts and henchmen.

Ironically, Mosul residents had a Ramadan much like any other in 2014, when it started just days after IS had proclaimed its “caliphate” spanning tracts of Syria and Iraq.

Families descended on Mosul’s tree-dotted parks along the River Tigris in the relative cool of dusk to share “iftar”, the meal that breaks the daytime fast.

All across town, men and women gathered in coffee shops and restaurants, many clutching nargileh water pipes or smoking cigarettes — that was before IS laid down the law segregating the sexes and banning smoking at the risk of corporal punishment.

Most of Mosul’s restaurants and open-air cafes then closed their doors.