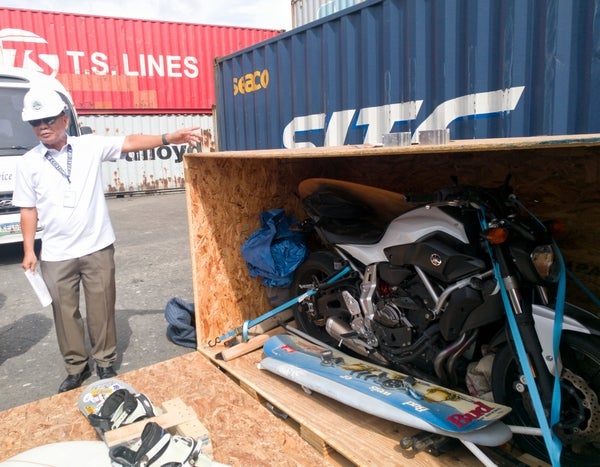 The Bureau of Customs (BOC) has seized four motorcycles, two bicycles, and an excavator with a combined value of at least P2.5 million in an inspection at the Cebu International Port on Thursday.

Customs Commissioner Isidro Lapeña said the shipments from the United States and Japan were declared “personal effects and household goods” but when scanned, the two freight containers that contained the items showed images that aroused suspicion among customs examiners.

“These were misdeclared items (intended to lessen Customs duties and taxes),” said Lapeña in a press conference shortly after he inspected at least 12 container vans that were “alerted” by the Customs.

The shipments, he said, will undergo seizure and forfeiture proceedings.

Though properly declared, these items, Lapeña said, would undergo valuation and assessment by the BOC officials.

If there are sufficient evidence, the BOC will suspend the accreditation of the concerned brokers and consignees.

The Customs commissioner was accompanied by Elvira Cruz, district collector of the Bureau of Customs during the inspection.

Lapeña, who served as director general of the Philippine Drug Enforcement Agency before he was named Customs Commissioner by President Rodrigo Duterte in August 2017, said opening container vans with questionable items is part of BOC’s campaign against smuggling.

“This sends a message to those who do illegal activities that they may be able to get past the BOC once, twice, thrice, but time will come that we will catch them,” he said.

Lapeña admonished those involved in smuggling and other illegal activities to stop what they are doing or they will face the consequences of their actions.

“My advice is for you to do your business legitimately. Pay the correct taxes. Anyway, it will go to the government treasury and benefit the Filipino people,” he said.