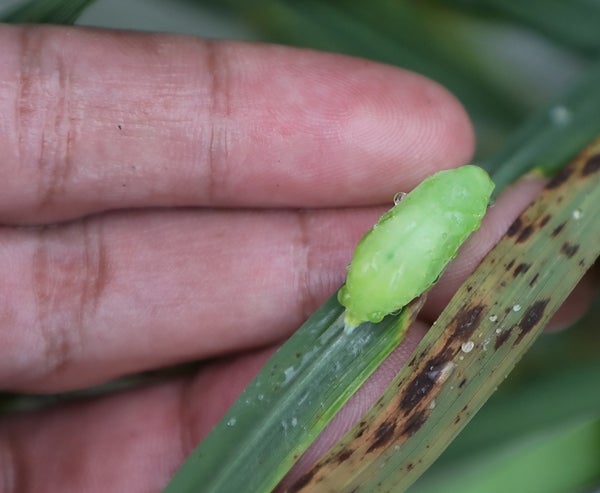 A farmer shows a juvenile green leaf hopper that had been infecting rice plants in Barangay Lunas, Asturias, Cebu with the tungro disease. CDN PHOTO/TONEE DESPOJO

AT LEAST 17 hectares of rice fields in Negros Oriental have been infested with black bugs, said Wilberto Castillo, chief of the Integrated Laboratory Services of the Department of Agriculture in Central Visayas (DA-7).

Quoting the outcome of their June 6 validation, Castillo said, the black bugs have been affecting rice fields in the the municipalities of Ayungon and Sta. Catalina.

“More than three hectares of rice farms in Barangay Tambo, Ayungon have been heavily infested with rice black bugs while 14 hectares were affected in Poblacion, Sta. Catalina,” he said.

“Especially during the months of June to September, these pests would really come out and attack and damage corn farms during rainy season,” Castillo added.

He said they are now distributing pesticides among Negros Oriental farmers to manage their black bugs infestation concerns.

“We are also conducting light trapping because rice black bugs are attracted to light. Once they are trapped, these bugs are killed through burning,” he said.

DA-7 is sending personnel to Negros Oriental next week to assess the extent of damage that black bugs have caused on rice plants in the province, he added.

The black bugs infestation, Castillo said, resulted from the use of the asynchronous planting method wherein farmers would just plant any crop that they want beside each other.

He said black bugs are that are often found on palay plants also affected their other crops.

Castillo said the pest would eat the palay’s base causing the crop to dry and eventually die.

Read Next
Voter registration resumes on July 2 for 2019 polls