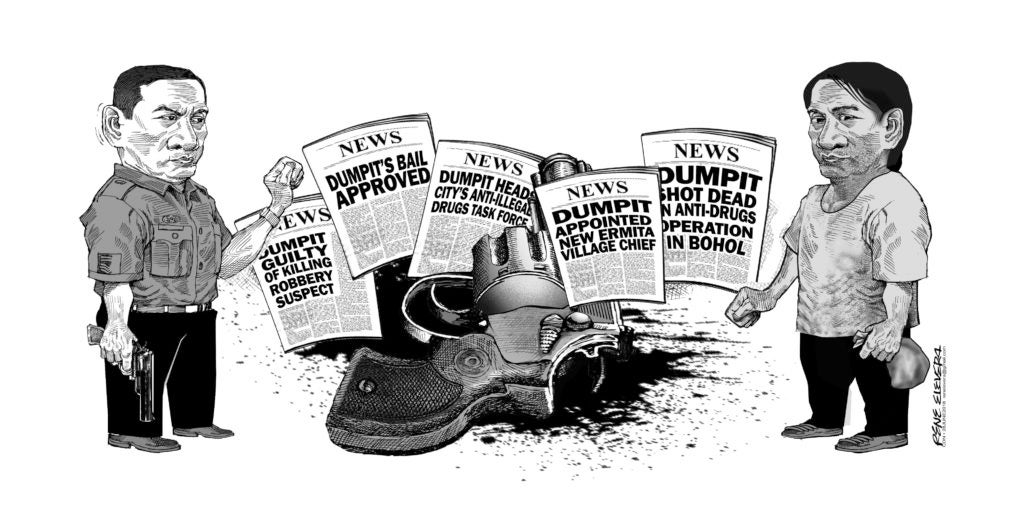 The death of SPO1 Adonis Dumpit in an anti-drug operation by the National Bureau of Investigation (NBI) came coincidentally enough amid reports that Cebu ranked third in drug kills in the country with 383 deaths.

The findings published by the Ateneo de Manila University and De la Salle University ranked Manila as number one with 2,000 deaths and Bulacan with 644 from May 2016 to Sept. 2017.

While Cebu City Mayor Tomas Osmena lost no time making the bold pronouncement that Cebu should rank number one for that rather unsavory title, he may change his tune once more details of SPO1 Dumpit’s death is unraveled by the NBI.

Not much is known other than the facts as disclosed by the NBI that Dumpit was allegedly scheduled to deliver some drug stocks from Cabawan District in Tagbilaran City when he was killed in an alleged encounter with authorities at 8:15 a.m. on Dagohoy Circumferential Road in Barangay San Isidro, Tagbilaran City.

The NBI said Dumpit was a high-level drug pusher and protector but as to how long he had been one remains unknown as of this writing. Still the disclosure is particularly alarming in light of the reported closeness he had with Osmeña, who paid for his bail after he served six years in prison.

Dumpit’s death will undoubtedly be used as political capital by the mayor’s critics in the political opposition given Osmeña’s very vocal pronouncements in the war against illegal drugs.

The controversial police officer’s death may also cast light on the transfer of two top police officials in Cebu whom the mayor fought to retain and defended by saying they were responsible for the gains in Cebu’s campaign against illegal drugs through the killings of some top drug traffickers in Cebu and Central Visayas.

But the findings also showed another aspect of the anti-drug war that Cebu officials and the Duterte administration may gloss over while brandishing the death toll as proof of their claims about the effectivity of their brutal campaign.

And that is regardless of the rising body count and the arrests, the source and supply of drugs continue to flow. And as the controversial multi-million peso drug shipment from China that made its way to Customs showed, it will flow unabated unless the government targets the source and cuts off the supply chain that feeds the drugs to Filipino users and pushers.

Having the most number of drug kills does not equate with being the safest in the country. On the contrary it only shows to the world just how violence is rampant in that area and it makes outsiders wonder if they won’t be victims of random encounters between police and drug dealers.