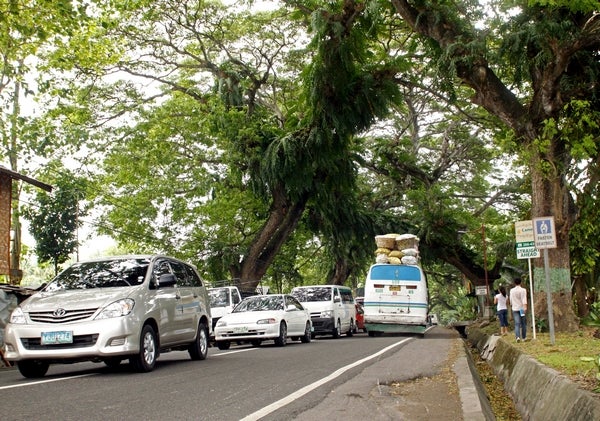 Traffic is expected to build up in Barangay Perellos, Carcar City where a road concreting project is being implemented by the Department of Public Works and Highways (DPWH). But centuries old trees provide a cool shade for motorists and pedestrians passing the area.

Cebu southbound motorists are advised to plan their trips ahead as officials expect delays in travel with the ongoing road repair works in Barangay Perrelos, Carcar City.

Provincial Capitol Traffic Management Coordinator Jonathan “Joy” Tumulak explained that the Department of Public Works and Highways in Central Visayas (DPWH-7) has been undertaking a P30 million road concreting project in the area.

Southbound light vehicle drivers are advised to turn right at the intersection of Sitio Catugasan, Barangay Perrelos, straight towards Barangay Can-asujan and then to Barangay Liburon before proceeding to Cebu south road.

Meanwhile delivery trucks and buses going south are not allowed to pass through the diversion route due to its narrow passage, Tumulak said.

“Mao nay hinungdan nga maka-cause siya og traffic kay mohunong man pila ka minuto nga mahabwa ang sakyanan ug magpuli-puli maoy hinungdan nga moatras ang traffic up to silingan nga lungsod (That is the cause of the traffic gridlock because vehicles traversing the national road will have to wait several minutes for their turn to pass, which could bring the traffic buildup up to the neighboring towns),” Tumulak said.

DPWH-7 District Engineer Leslie Anthony Molina said that since May they have been excavating the 800-meter asphalt road to replace it with concrete pavement.

The concreting project is expected to be completed before the year ends, said Molina.

Traffic enforcers will be deployed along the area while signages will also be in place to guide motorists, Tumulak said.