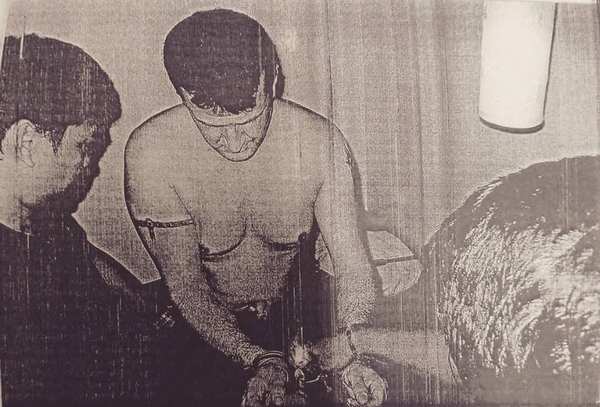 Thomas Michael Ruhland, a German national accused of trafficking minors, during his arrest at a motel in Talisay City on Feb. 2, 2011.

A German national who was tagged as a member of a global child pornography syndicate was convicted on Friday by the Cebu City Regional Trial Court (RTC) for taking nude photos of two teenage girls in a motel in Talisay City in 2011.

Thomas Michael Ruhland, 46, was found guilty of qualified trafficking and child abuse, and was meted the penalty of life imprisonment and another 20 years in jail for the two charges, respectively.

In his decision, Judge Jose Andal of RTC Branch 24 in Cebu City gave credence to the testimonies of the victims over the denial of the accused.

“This court is fully convinced and so finds that the accused performed all the elements in the commission of the offense,” he said.

“He (Ruhland) did maintain and hire the victims to engage in pornography by offering them money in exchange for their nude pictures. He took advantage of their vulnerability to attain his purpose of exploiting them,” he added.

Kristofferson was convicted in Sweden for child pornography in 2013.

“It appeared that Kristofferson had been communicating with women in Cebu, directing the sexual abuse of young Filipino girls ages 4 to 11,” said Gubalane, who is closely coordinating with the International Justice Mission, a group that actively campaigns against online sexual exploitation of children.

“We cannot allow brutal abuse and exploitation of children to continue without accountability,” he added.

Cybersex is a billion-dollar global industry that proliferates with easy access on the Internet.

During the promulgation of the Ruhland case on Friday, the accused was represented by a temporary counsel since his lawyer, Salvador Solima, was killed inside his residence in Barangay Guadalupe, Cebu City just last Monday.

Police have arrested and filed murder charges against three persons who allegedly had a hand in Solima’s killing.

Solima’s wife was also wounded during the incident.

The Solima murder was believed to have nothing to do with the case involving Ruhland as the police had said that unsettled debts over a land that Solima’s wife purchased was seen as the motive behind the murder.

Lawyer Noemi Truya-Abarientos of the Children’s Legal Bureau (CLB) said they were expecting Ruhland to contest his conviction before the Court of Appeals.

But for now, Abarientos said CLB, which actively prosecuted Ruhland, was elated with the outcome of the case.

“Justice is served, and we hope that this trend continues. I hope this (case) sets as an example to the others that they just can’t do things like these to our children,” she told the Cebu Daily News..

Abarientos warned the public not to be deceived by people who hire them as models but are actually going to sexually exploit them.

“Modeling is nice to hear and ploys like these continue. I beg you not to be vigilant so you won’t fall prey to them,” she said.

The father of one of the girls’ exploited by Ruhland earlier sought the assistance of the National Bureau of Investigation in Central Visayas (NBI-7) after he learned that his daughter went with the accused.

Agents of the NBI hatched an entrapment operation which led to the arrest of Ruhland inside a motel in Talisay City on February 2, 2011.

Two girls were rescued during the operation.

Abarientos said authorities found out that Ruhland had hired girls to pose naked in exchange for certain amounts of money.

A 14-year-old victim said Ruhland didn’t just take nude photos of him but also raped her.

During court trial, Ruhland admitted taking photos of girls but said they were not for pornography but just to entice people to buy houses for sale.

“He (Ruhland) said the presence of girls in the photos of houses will help sell the property,” Abarientos said.

“His denial, however, did not convince the judge,” he added.

Ruhland is currently detained at the Cebu Provincial Detention and Rehabilitation Center.

Cebu Vice Gov. Agnes Magpale, co-chair of the Provincial Women’s Commission, said the fight against sexual exploitation of minors and other forms of human trafficking shall continue.

“There’s definitely no let up in our campaign,” she said.

Cyberporn mothers on the lam

As this developed, the Philippine National Police Women and Children Protection Center (WCPC)–Visayas Field Unit announced that they filed a string of cases against seven suspected online traffickers from Cordova town, Cebu for exposing children to cyberpornography.

The respondents, some of whom are mothers, remain at large.

“We filed a case against them so that the long arm of the law will catch them up,” said Senior Supt. Romeo Perigo, chief of the WCPC-Visayas Field Unit, in a press conference on Friday.

Identities of the respondents were kept confidential pending resolution of the cases filed against them.

Cordova Mayor Mary Therese Sitoy–Cho, meanwhile, urged barangay officials to help monitor activities in the municipality, which police authorites have tagged as a hotspot for cyberpornography.

“Yes, there are still those who engage in that kind of business. The monitoring shall continue,” she said. /WITH USJ-R INTERN GERARD VINCENT FRANCISCO