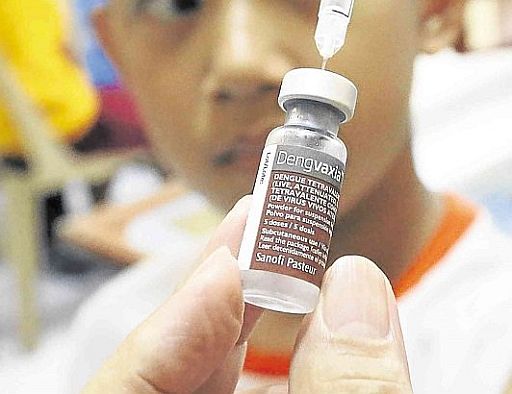 THE seven children in Cebu who died and underwent forensic examination showed common signs believed to be attributed to having received Dengvaxia vaccine shots.

Public Attorney’s Office (PAO) chief Lawyer Persida Acosta told Cebu Daily News on Sunday that the children, who were aged from 10 to 12, were among the 150,000 children in Cebu who received a dose of the controversial anti-dengue vaccine, which was given for free until last year to schoolchildren across the country under the P3.5-billion immunization program of the Department of Health (DOH).

“It is alarming. (It shows) the common pattern of signs and symptom from vaccination. Negative history ng anumang sakit bago nabakunahan (of any illness before they were vaccinated),” she said in a phone interview.

According to Acosta, the seven children were among the 66 children in the country whose deaths were suspected to be related to them having received the anti-dengue vaccine.

The seven were from Cebu City (1), Mandaue City (2), Lapu-Lapu City (2), Bantayan Island (1) and Medellin (1), according to Lawyer Maria G-Ree Calinawan, head of the PAO in Central Visayas.

PAO undertook the autopsy of the 66 children by a team led by Dr. Erwin Erfe, the forensic laboratory director of PAO.

“Pare-pareho nang (They are all had the same) pattern. Common manifestation nang internal organ,” Acosta said.

PAO was directed by the Department of Justice (DOJ) to conduct a gross forensic examination of those children who received a shot of the Dengvaxia vaccine and had died.

The most recent incident of a suspected Dengvaxia vaccine victim in Cebu was Trishanne Casona, 10, from Barangay Basak, Lapu-
Lapu City.

The girl’s mother, Marilyn, sought the help of PAO to investigate her daughter’s death as she received the Dengvaxia shot in July last year and died last June 21. The girl died a few days after complaining of a headache.

DOH-Central Visayas Regional Director Jaime Bernadas, however, said that Casona’s cause of death was due to intracerebral bleeding.

“It was not reported to be infectious or post-Dengvaxia Dengue infection,” Bernadas said in a text message on Sunday.

He added that their personnel were trying to reach the family of Casona for a possible autopsy.

However, the parents of Trishanne have already allowed the PAO forensic experts to exhume the remains of their child last week for an autopsy, in order to determine the “real” cause of her death.

Casona was exhumed from her tomb at the Humay-Humay Public Cemetery in Lapu-Lapu City last July 6 for the autopsy.

During the forensic examination, Acosta said Trishanne was found to have suffered severe bleeding in the brain, a finding that was common among Dengvaxia-vaccinated children who had died.

“Ito na yong validation natin sa (This is already the validation of the) declaration ng Sanofi (Pasteur),” she said.

Sanofi Pasteur, the drug manufacturer of the CYD-TDV dengue vaccines or Dengvaxia, had earlier identified possible risks of the vaccine in a paper released on Dec. 22, 2015.

These include allergic or anaphylactic reaction, viscerotropism and neurotropism, increase in severity of dengue disease from the start of vaccination and waning protection against dengue disease over time.

“Pumapayat pero lumalaki ang tiyan. Nalulunod sa sariling dugo ang kanyang lamang loob (They grew thin but had distended stomachs. Their internal organs were drowning in their own blood),” Acosta said, as most of the children showed enlargement of their internal organs and severe bleeding.

This prompted PAO to file criminal and civil cases against DOH Secretary Francisco Duque III, including a complaint for reckless imprudence resulting to homicide, obstruction of justice charges, and for violations of the Anti-Torture Law.

Acosta yesterday reiterated her call on the parents of the at least 830,000 schoolchildren who received the anti-dengue vaccine not to panic.

“Huwag silang mag panic kaagad. Lakasan ang loob at bigyan ng (They should not panic. They must stay strong and give) multivitamins (to their children who received Dengvaxia vaccines),” she said.

She added that if the Dengvaxia recipients suffered from headache or stomach pain, they should be brought to the hospital immediately.