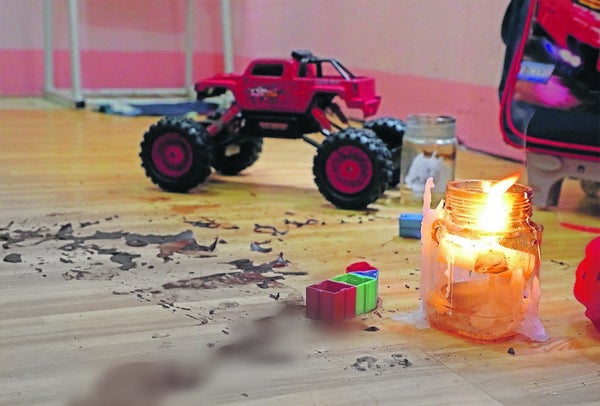 The toys of Bladen Skyler Abatayo and a lighted candle are placed around the area where the four-year-old child died on Tuesday, July 10, 2018, after he was hit by a stray bullet in an anti-drugs operation near his home in Sitio Bato, Barangay Ermita, Cebu City.

MARC Anthony Abatayo was supposed to bring his family to Simala Shrine in Sibonga to celebrate his birthday yesterday, July 11.

But the 27-year-old father instead spent the day attending on his son’s wake.

Bladen Skyler, 4, the oldest of Marc Anthony’s two children with wife Gwen, was killed by a stray bullet fired from a gun during an anti-drugs operation in the home adjoining that of the Abatayos in Sitio Bato, Barangay Ermita on Tuesday afternoon.

“I still can’t believe it. He was a very good son – respectful, sweet and very diligent,” Marc Anthony said.

Bladen Skyler, who was in nursery in a private university in the downtown area, had just finished doing his homework and was practicing to write his name when a bullet struck him. 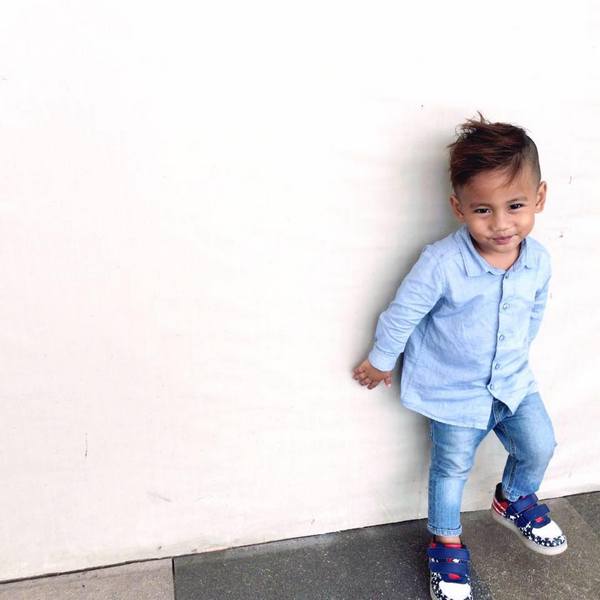 “I asked him to really practice writing his name. Yesterday was the first day that he has written his whole name on his own. I was very happy. It seemed like his gift for me on my birthday, but I did not know that was also the last,” Marc Anthony recalled while trying to hold back tears.

According to Marc Anthony, he left the child with his wife, Gwen, at around 1 p.m. to buy spare parts for his motorcycle.

The couple also has a 2-year-old daughter that was also left with Gwen.

Bladen, he said, begged to go with him but he said no because it was very hot outside.

“Had I known that this would happen, I should have just brought him with me despite the weather. I regretted it so much,” he said.

Senior Insp. John Kareen Escober, chief of the Carbon Police Station, said four of his personnel went to the area on Tuesday afternoon to respond to a report regarding a group of men who were allegedly having a pot session in an abandoned house adjacent to the Abatayos’ home.

Escober said the responding police positively saw four men having a pot session on the second floor of the abandoned house, two of whom were armed.

One of the responding police personnel allegedly grappled with one suspect who was about to point his gun at them.

Escober added that the gun that killed the child was that of the suspects, saying that none of his personnel fired their service firearms.

The suspects, he said, then ran away and the police failed to chase them.

However, the neighbors who were around during the incident dismissed the policemen’s claims and said that no drug bust or chase happened.

“Mingaw kaayo diri gahapon. Usa ra ka pulis among nakit-an nga nigawas, nagsunod ni Gwen nga nagdala na sa bata nga nagkadugo,” said one of the residents who was selling banana cue in her stall beside the road.
(It was very peaceful yesterday. We only saw one policeman who was running behind Gwen. She was carrying her blood-drenched child.)

“Among nadunggan ra kay naay nibuto, dayon nigawas ang inahan nagdala na sa iyang anak. Nagsunod ang usa ka pulis. Nahagba naman si Gwen diha sa tungod nagpakitabang, unya iyang (police) gidagan ang bata paggawas didto. Among gipasundan sa among mga silingan aron makahibawo mi asa dalhon. Mga 30 minutes tingali usa pa naabot ang uban nga pulis,” said another resident.
(We only heard one gunshot. The mother came out carrying her son. One police emerged behind her. Gwen collapsed in front of us crying for help then the policeman picked up the child and brought him to the hospital. We asked our neighbors to follow him to find out where he brought the child. The other policemen came about thirty minutes after.)

In a close-circuit television (CCTV) footage of the barangay, a policeman in civilian clothes was seen carrying the child.

The neighbors believed that the policeman slipped while he was in the abandoned house, causing his gun to fire off.

The hole on the wooden wall of the room, believed to be left by the bullet that hit Bladen Skyler in his chest, was located about one foot from the floor, which was at the second level of the room.

Most residents of Sitio Bato were enraged by the incident and have called for justice for Bladen Skyler’s senseless death.

When the child’s coffin arrived in the area at 2 a.m. on Wednesday, the residents lit candles on the road leading to the family’s home where the wake would be held while chanting “hustisya” (justice) in unison.

The residents of Sitio Bato collectively initiated a signature campaign to urge the Commission on Human Rights in Central Visayas (CHR-7) to investigate the incident.

Bladen Skyler, according to the residents, was an exceptionally dear child in their place.

In the petition, the residents pointed out that the police also needed to ensure public safety even as they conduct operations to maintain peace and order.

“We will know, definitely we will ferret out the truth, whether the bullet that hit the child came from the police or not. An innocent life was lost, somebody should answer the legal consequence of such life deprivation,” Odron said in a text reply to Cebu Daily News.

Odron also challenged the Philippine National Police to submit the firearms of the policemen involved in the operation to a forensic ballistic examination and cooperate in the CHR investigation.

“This is a motu proprio investigation conducted pursuant to its constitutional mandate, and the testimonies of the witnesses will further strengthen whatever findings the CHR will come up,” Odron said.

Marc Anthony also appealed for the involved policemen to shed light on what really happened during the incident.

He said that he will continue to seek justice for his son’s death.

Marc Anthony also lashed at allegations that he was one of the four men allegedly having a pot session in the abandoned house.

“They should not drag my name into this. I have all the evidence that I was at a motorparts shop, including the receipt of my purchase and the time I paid. I can sue them for saying that I’m a drug user,” said Marc Anthony.

Osmeña, speaking during a press conference yesterday, said that he, together with Cebu City Police Office (CCPO) acting director Senior Supt. Royina Garma, visited the family of Abatayo shortly after the incident happened.

“I was there last night. I gave the family money, from personal pockets. I gave them P10,000 just to get them started,” said Osmeña.

He added that he would also shoulder the expenses needed for Abatayo’s burial and autopsy.

“Colonel Garma will handle the investigation; my role is purely humanitarian. I have assured the family that all expenses related to the wake and burial will be taken cared of. We can even look for funding for family members who want to visit from out of town. It is the least we can do,” said Osmeña.

Garma said that they have started investigating the four policemen involved in the operation.

Garma said the family of Bladen Skyler went to her office on Wednesday to have the four policemen under the drug enforcement units investigated and informed them that an investigation was already underway. Garma said they also asked clearance from Police Regional Office in Central Visayas (PRO-7) to conduct a paraffin tests on the four police operatives. However, Garma said she has no ground to relieve the four involved policemen.

Who fired the shot?

In a separate interview, Francisca Pogoy, Bladen Skyler’s grandmother, said that they only wanted to know who was responsible for their grandson’s sudden death.

Pogoy claimed that one of the policemen came to see them and admitted that he could have possibly shot the victim.

“Ang amo lang sa sayon raman gud mangayo’g pasaylo. Maabot ang time, kun ulitawo or minyo ba siya naa siyay anak, ma feel niya unsa kasakit among gibati karon,” said Pogoy.
(We only want him to apologize. The time will come – whether or not he is single or married – when he will have his own child and he will feel what we are feeling right now.)

Pogoy said they were not yet considering to file a case against the police because all they needed right now would be for the culprit to admit to his crime and ask for forgiveness.

But Garma said there was no one to blame for the death of the child other than illegal drugs.