JOY’S WISH: A HUG FROM PA 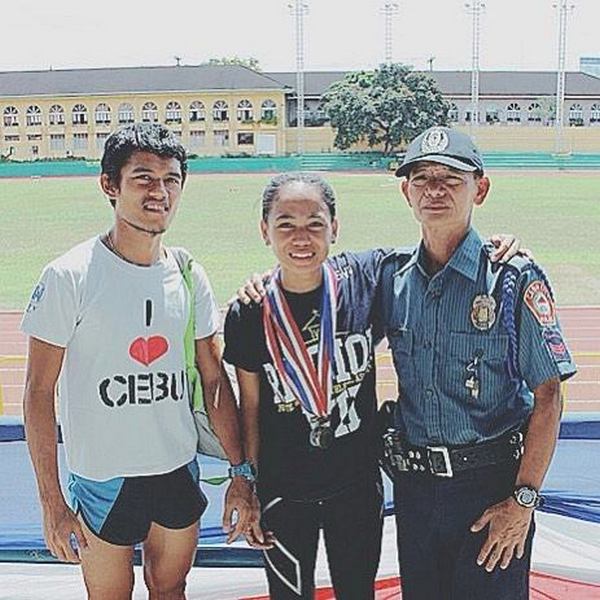 Mary Joy Tabal (center) is with her father, Rolando, (right) and long-time coach John Philip Dueñas (left) in a photo during her last National Prisaa competition in 2012 at the Cebu City Sports Center. As she celebrated her 29th birthday yesterday, Tabal said her wish was to see or hug her late papa, even just through a dream. contributed

There are many things Mary Joy Tabal wished for as she celebrated her 29th birthday yesterday.

A fruitful career in running, a gold in the upcoming Asian Games, another stint in the Olympics, and so on.

But the Cebuana Olympian, who is the reigning five-time National Milo Marathon champion and a gold medalist in the Southeast Asian Games, had one particular wish she really yearned for this year: a hug from her dad.

Tabal, who is from barangay Guba, Cebu City, celebrated her birthday for the first time without her dad, Rolando, who passed away last December due to complications from pneumonia. He was 58.

“I wish I could turn back time, to the moment when I could hug my papa,” Tabal told Cebu Daily News. “Mao man jud na or any way na makita naku and ma hug si papa. Maski sa damgo lang.” (That’s it or any way I could see or hug papa. Even through a dream.)

Tabal is a daddy’s girl, so it is not really a surprise why she misses her no. 1 fan so much.

But she knows she has to move on and that’s what she’s doing now. In fact, with her dad still serving as her inspiration and motivation, Tabal is busy preparing for her upcoming stint in the Asian Games this August. Women’s marathon will be on August 26.

She is currently in Tuscany, Italy still training for the quadrennial event.

“I just wish that I’m always healthy, injury free, happy and full of love and hope, that I can continue to inspire more,” Tabal said.

Tabal said that they have returned to the camp in Tuscany last July 10 after spending a month in Monte Amiata, where she had her altitude training.

“Endurance is the only thing I lack. I just need to do long runs and I’m done,” said Tabal of her training.

There is a chance that she might go back to Monte Amiata but that will depend on coach Giambrone Giuseppe’s decision as he will still assess if the weather in Tuscany will be too hot for her training.

Tabal is expected to return to Cebu in the second week of August, where she will have her tapering training and acclimatization while awaiting further instructions from the Philippine Amateur Track and Field Association.

The Asian Games will open on August 18.