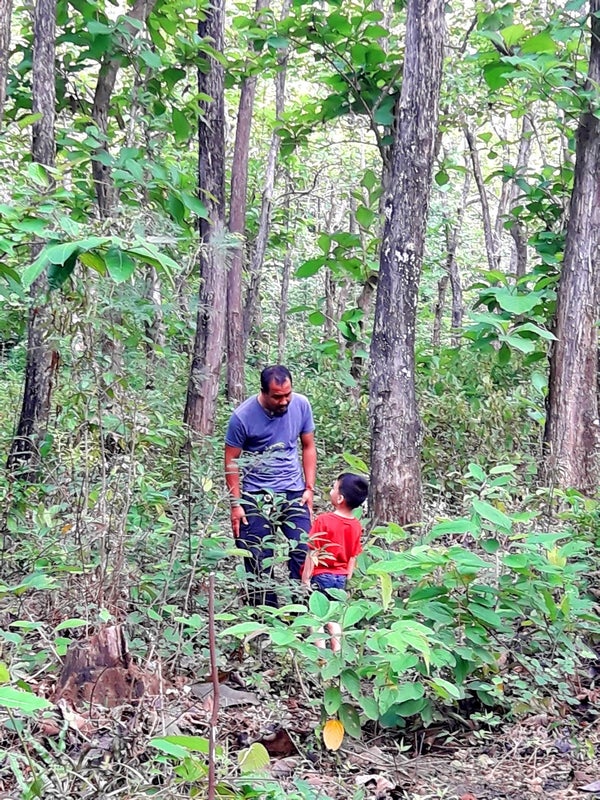 Forester Juan Pablo Yao, technical officer of the Philippine Business for Social Progress, answers a child’s question about the bird and trees in the forest.

Forester Juan Pablo Yao never grows tired of educating people about the importance of planting the right type of trees.

Yao works for the Philippine Business for Social Progress (PBSP) and has been climbing the mountains of the Central Cebu Protected Landscape (CCPL) since 2011 when he became part of the non-government organization’s environmental portfolio.

Yao, 37, is no stranger to traversing the often treacherous forest paths as he grew up tagging along with his father, Calixto, also a forester in the latter’s environmental projects.

Yao is a mountain climber and obviously, a nature lover.

His work with PBSP includes dealing with people’s associations and community-based groups, a task which Yao describes as both challenging and rewarding.

“Importante nga mapasabot sila sa mga sakto nga kahoy nga itanom aron mobalik ang atong mga langgam sa atong kalasangan (It is important to make them understand about planting the right types of trees so that our birds will come back to our forests),” added Yao.

The Dulhogan People’s Association in Cebu City’s Barangay Buhisan is among several groups that Yao collaborates and works with in his past seven years with PBSP.

They also monitor the growth of the trees. 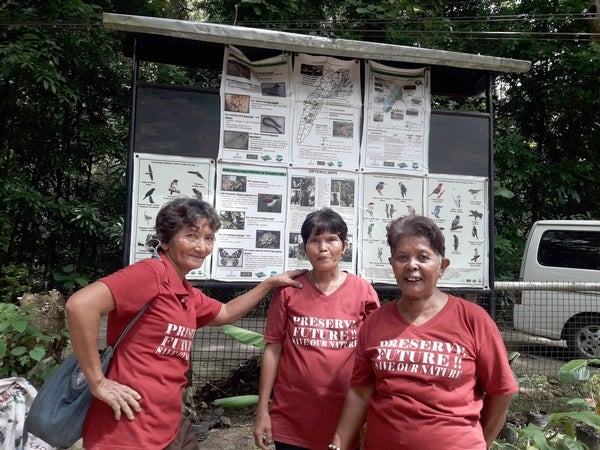 Members of the Dulhogan People Association such as (from left) Letecia Nipa, 65, Lucia Largo, 54, and Theresa Largo, 68, earn a living by propagating endemic and native tree seedlings in the Buhisan Watershed and Forest Reserve.

“Sila man ang mga nagpuyo diri. Sila gyud ang kahibaw unsa ang mga nahitabo diri. Kinahanglan ta mo work together nila (It is they that live here. They know what is happening here. We need to work together with them),” said Yao.

According to Yao, reforestation efforts are crucial in making sure that a balanced ecosystem continues to thrive.

Aside from absorbing carbon dioxide in the air and preventing flooding, trees help increase groundwater recharge, an important process in ensuring a long-term source of drinking water for Cebu City.

As part of PBSP’s reforestation caravan, some 50 volunteers from Lear Corporation went up to Barangay Buhisan as volunteer tree planters last July 14.

The village which sits within the Buhisan Watershed and Forest Reserve (BWFR) is part of the Central Cebu Protected Landscape (CCPL) spanning 29,062 hectares.

Native or indigenous tree species are found in a certain ecosystem due to natural distribution or evolution. These include narra, kamagong, yakal and lauan.

Endemic species, on the other hand, are those found only in a particular area such as the Cebu cinnamon tree (Cinnamomum cebuense), locally known as kaningag, which is endemic to Cebu.

Some bird species are also endemic to Cebu such as the Cebu Black Shama (siloy), Cebu Flowerpecker and Cebu Hawk Owl which are in the critically endangered, and endangered status.

Acasia, gmelina and certain species of teak planted in Cebu’s forests are considered as introduced species.

Through the Cebu Hillyland Development Program in 1988, PBSP became part of the advocacy to declare protected areas in Cebu to conserve and maintain its watersheds and forests for the continued “existence, survival, sustenance, growth and development of present and future inhabitants of the Island of Cebu.”

PBSP is open to partner with companies that are interested to volunteer as treeplanters or to join the “adopt-a-hectare” program to sustain reforestation efforts.

“One act of planting a tree, the right kind of tree, is a step towards ensuring the future of our children,” said Yao, a father of three.

Read Next
Week-long march from S. Luzon to Digong’s SONA kicks off in Calamba