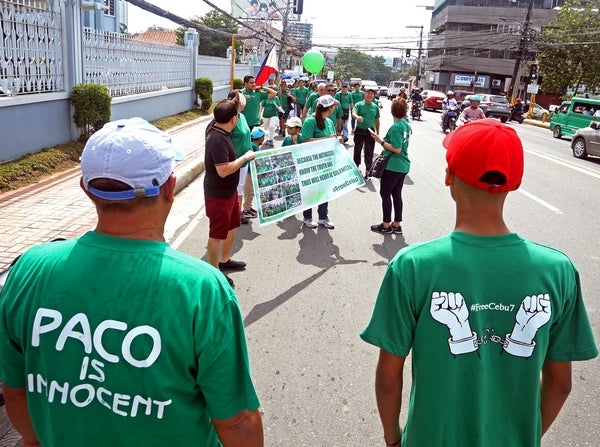 The relatives, friends and supporters of the Chiong 7, the seven men found guilty of the rape-slay of Marijoy and Jaqueline Chiong, hold a prayer walk on Sunday seeking their release from jail. CDN PHOTO/LITO TECSON

The families of the Chiong 7, the seven men convicted of the rape-slay of the sisters Marijoy and Jaqueline Chiong, are planning to appeal to President Rodrigo Duterte for an executive clemency.

“Our lawyers are already making a draft, but we have to make sure that we put everything in. So whatever that is placed there, we have to support it. We are gathering those supporting documents. Hopefully, we can ask the president because that is his prerogative,” said Margarita “Margot” Larrañaga, on Sunday.

“We are hoping that as much as they have already served 21 years, The president would see that these boys are innocent in this case. I hope that he will give them the executive clemency because that is already his prerogative,” she said.

Margarita Larrañaga is the mother of one of the Chiong 7 convicts, Francisco Juan “Paco” Larrañaga.

Monalisa del Gallego-Jarque, one of the witnesses who vouched for Larrañaga’s innocence in the crime, said that they were hopeful that the president would be able to evaluate the case and would grant the coveted clemency for Larrañaga and the rest of the Chiong 7.

“We ask for him (Duterte) to look into the case because he is also a lawyer, so he understands the injustice that has happened here. We seek clemency. Twenty-one years have been too long already,” said Jarque, who also organized a prayer walk calling for the release of the Chiong 7.

But Thelma Chiong, the mother of the Chiong sisters, maintained that the Chiong 7 should remain in jail.

“Bahala na sila. Nakalimot sila nga double murder na ang ilang kaso? Double life sentence na. Now serving 21 years, kulang pa ang ilang serbisyo (I don’t care what they will do, but I think they forgot that their case is a double murder case, and that their penalty is a double life sentence. They have served 21 years in jail, but they still will have to serve more years to complete their sentence),” said Chiong in a text message.

Chiong said that the pain of losing two of her children is still daunting.

“After 21 years, it is still very painful to think that I lost Jackie and Joy, and they just say they want to go out already? They should not forget the crime that they committed,” Chiong said.

On Sunday’s prayer walk, which was also led by activist priest Fr. Robert Reyes, the priest encouraged the families and relatives of the Chiong 7 not to lose hope that they could be freed.

This is the third time that Fr. Reyes went to Cebu for a mobilization to call for the release of the Chiong 7 since 2004.

The walk started with a Mass at the St. Pedro Calungsod chapel in the Archbishop’s Residence compound.

The walk involved a stop at the Fuente Osmeña Circle where they released balloons and then they walked back to the Archbishop’s Residence for the end of the activity.

Read Next
Police to Tom: Put on record threats you received