Exciting season ahead for Cesafi 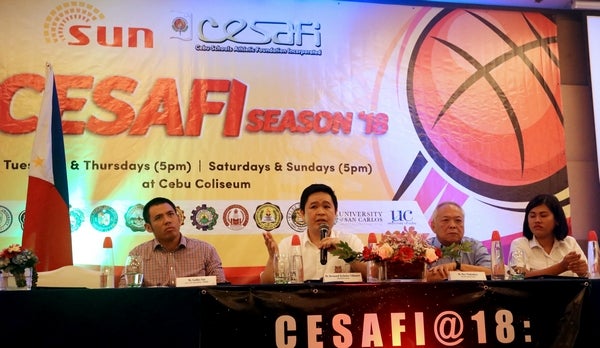 A dynamic league president, a new division, a new member school, and a guest school/team will be among the things to look forward to in the 18th season of the Cebu Schools Athletic Foundation Inc. (Cesafi), which was launched yesterday afternoon at the Harolds Hotel.

This season, which will kick off on Saturday with the basketball games at the Cebu Coliseum, is figured to be an exciting one primarily with the league being led by its new president, Engr. Bernard Nicolas E. Villamor of the Cebu Institute of Technology-University (CIT-U).

Villamor’s leadership is expected to be geared on the younger generation, which explains the league’s theme for this year Cesafi @ 18 Millennial and Beyond.”

“There are three things we want to focus on the 18th season of Cesafi that is visibility, engagement, and excitement,” said Villamor.

Among Villamor’s plans in his term is also to give all of Cesafi’s events exposure.

“We want to showcase not just basketball and volleyball but other sports and also the academic and cultural events which are always left behind every year,” he said

“Cesafi doesn’t end after all sporting events. We have academic and cultural events as the second part of the season. We want the academic competition to become a platform for other Cesafi students who can’t perform in sports,” Villamor said.

Villamor is also looking for more participation from member schools, encouraging them to “ activate the school spirit.”

“We want the students to be proud of their schools that they should support their school to watch the games and sing their Alma Mater songs regardless of the resulting win or lose,” he said.

Meanwhile, the league’s new school member is the University of Cebu Lapu-Lapu and Mandaue (UCLM) while the guest team is the Sisters of Mary School Boystown.

UCLM will be participating in seven events while Boystown will be competing in five.

The Cesafi board also approved this year the 12-Under division for basketball, football and chess.