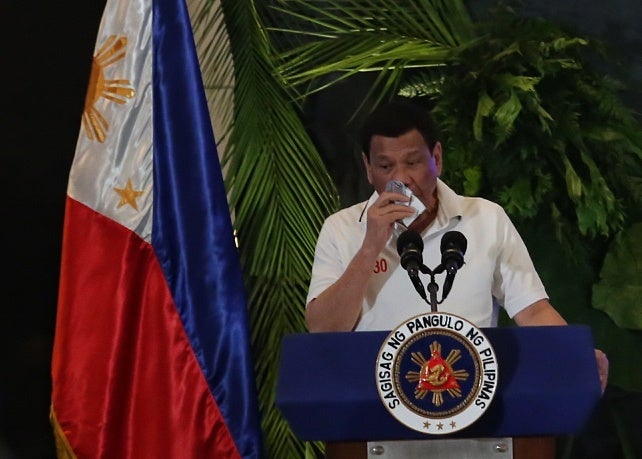 President Rodrigo Duterte tonight showed up before 200 mayors from different municipalities in Visayas to prove something: He is alive and well.

He is not dying and in coma, contrary to the claim of Jose Maria Sison, exiled leader of the Communist Party of the Philippines – New People’s Army (CPP-NPA).

“Pagpasok ko (When I entered the venue)…let me just disabuse the mind of Sison. His mind is so abused,” said President Duterte, prompting his audience to break in laughter.

According to Duterte, he did not know that made him say I am comatose. In fact, he said, it is Singson who is sick with cancer.

He went on to call Sison a “freeloader” in The Netherlands.

“You are not a man. You are spent. You’re talking nonsense. You’re a discredited leader,” the President said of Sison.

And as if to prove that he was in the pink of health, he remained standing and spoke for over a hour without taking a break.

The President was in Cebu City yesterday evening as the guest of honor for the Visayan Island Cluster Conference of the League of Municipalities of the Philippines (LMP).

Clad in a white polo shirt and black slacks, Mr. Duterte entered the venue without any aide closely assisting him as he walked and climbed towards the stage.

He was about two hours late since he was expected to arrive at 5:30 p.m.

Although the President appeared to be in good spirit, he was seen wiping his nose a couple of times.

He told the mayors that he would make his speech only two minutes long, but it ran for more than an hour now.

“After this I’ll be going back to Davao City,” Mr. Duterte added.

He claimed that if there would be someone who would kill him, it would be the Central Intelligence Agency (CIA), which he claimed has been wiretapping his cellular phone.

“But I know that the US is listening. Yang (CIA) ang papatay sa akin (That CIA will be the one that will kill me),” he added.

On the other hand, President Duterte once again brought up the problem on illegal drugs.

He not only took a jab against critics of his administration’s intensified campaign against illegal drugs but also alleged that several wealthy individuals inin Cebu are also hooked into illegal drugs.

Among those who were with the President yesterday in the event included Presidential Spokesperson Harry Roque, Senators Cynthia Villar, JV Ejercito, Ilocos Norte Gov. Imee Marcos, and Maguindanao Rep. Zajid Mangundadatu, all of whom were being eyed to run as Senators for the May 2019 midterm elections.

Mr. Duterte’s visit on Tuesday was his fifth this year. Cebu delivered more than two million votes for the presidential bid of the former mayor of Davao City.