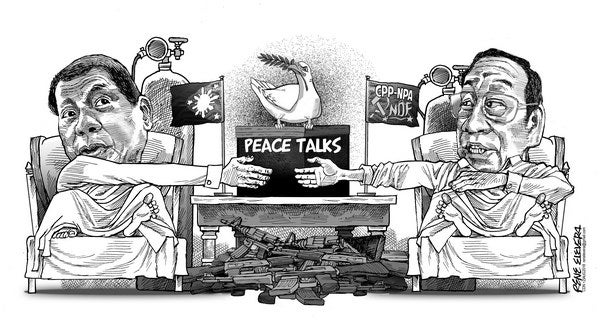 The verbal spat between President Rodrigo Duterte and Communist Party of the Philippines (CPP) founder Jose Maria Sison over their respective health status is reflective not only on their physical condition but also on the legacies they will leave behind once they have run their course in this world.

A Facebook Live post by President Duterte showing him dining with a young lady came amid Sison’s claims that the president’s health is deteriorating despite the best medical care afforded to him as the country’s leader.

The President retorted by saying that he wished Sison will live a thousand more years similar to Cartaphilus, the Gentile porter who struck Jesus Christ while he was headed for crucifixion and was supposedly cursed to walk the earth until the Second Coming.

Sison responded by saying he was glad that Duterte remains, in the President’s own words to be “fairly healthy” so he can face whatever charges will be filed against him, particularly in this relentless and bloody war on drugs.

Both men are in their 70s and it remains to be seen how long they are in this world. No one can know for certain how each of them are holding up but the President clearly doesn’t have the easier time as the workload and pressures of the job can take a toll on him and any other who is elected to the presidency.

Aside from his chosen program, Duterte is also kept busy campaigning for federalism as evidenced by this week’s visit to Cebu when he was scheduled to meet with mayors in the Visayas.

In contrast, Sison can well afford to bide his time lecturing on the evils of capitalist imperialism while continuing to intone the validity of his ideological argument to those whom he can still lull into subscribing into his beliefs, all in the comfort of his air-conditioned asylum in the Netherlands.

Both have their supporters but it remains to be seen who between them will leave a lasting influence on the country in the years to come. For Sison, the communist movement had survived several administrations, its influence neither waxing nor waning in the years since it was founded.

And though President Duterte’s war against illegal drugs had drawn its share of flak and there are more than enough people questioning and suspecting how it was being waged, it had driven home the message that the drug menace is not something to be swept under the rug and ignored out of existence.

While the Filipino people continues to believe in a democractically elected government, they also believe that their democracy should not be paid for with bloodshed nor with promises of a utopia that in reality demands complete subservience of one’s will to an unaccountable power bloc..

Read Next
HOW GOOD IS IT?