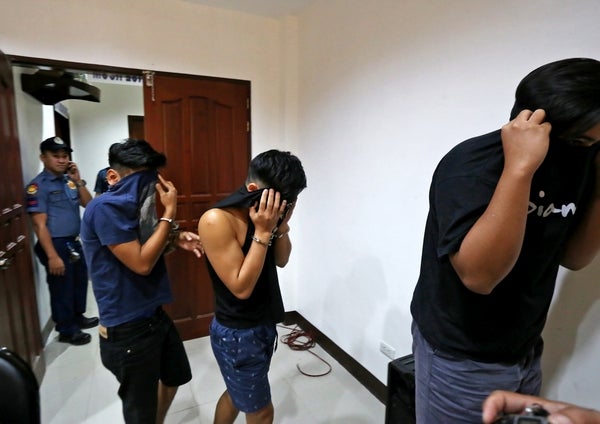 Police are looking into the link of an unidentified Cebu City Jail inmate to the estimated P7 million suspected shabu haul in two anti-illegal drugs operations in Cebu City in a span of eight hours from Monday evening to Tuesday morning.

Chief Insp. Jackyll Bilibli, Cebu City Police Office Drug Enforcement Unit chief, said that they were looking into the information given by the 17-year-old boy, who was caught allegedly selling 300 grams of suspected shabu in a buy-bust operation in the parking lot of a condominium in a business district in Barangay Apas, Cebu City at past 9 p.m.

Aside from the teenager, two other adults — the 20-year-old teener’s uncle, and Hubert Clarisan, 22, of Barangay Danawan,Toledo City — were also arrested and were caught with another 200 grams of suspected shabu in their possession.

Bilibli said that the total 500 grams of suspected shabu confiscated from the suspects had an estimated Dangerous Drugs Board value of P5.9 million.
Bilibli said that the teen suspect was turned over to the custody of social workers but not after they questioned him about his alleged illegal drug trade.
The teener told police that he allegedly got his supply of illegal drugs from his boss, who he only named as Kim.

He also told police that his boss also got his illegal drugs allegedly from an unidentified inmate of the Cebu City Jail, who is allegedly the boss of the teener’s boss.

The teenager also claimed that his uncle and Clarisan were just accompanying him in allegedly delivering the suspected shabu to their clients.
Bilibli said that they arrested the teener, who arrived at the parking lot in Barangay Apas in an SUV at past 9 p.m.

He said that the teener got off the vehicle and when the illegal drugs changed hands and the teener was arrested, the uncle and Clarisan got off the SUV to find out what the commotion was about.

Bilibli said that when they found out that it was the police, they tried to escape but they were also arrested after a brief chase.

Bilibli said they then conducted another operation at 6 a.m. in Barangay Kamputhaw, where they caught Lyka Alejo, 20, who was residing in the

barangay but is from Masbate, with a large pack of suspected shabu weighing 100 grams.

Bilibli said that the suspected shabu had an estimated Dangerous Drugs Board value of P1.1 million.

Bilibli said that the teen suspect also said that Alejo had also known someone in the Cebu City Jail.

Although the teener was turned over to social workers, Bilibli said that they would file charges of illegal possession and selling of illegal drugs against the 17-year-old boy.

The other three suspects were detained at the Cebu City Police Office detention cell pending the filing of charges.