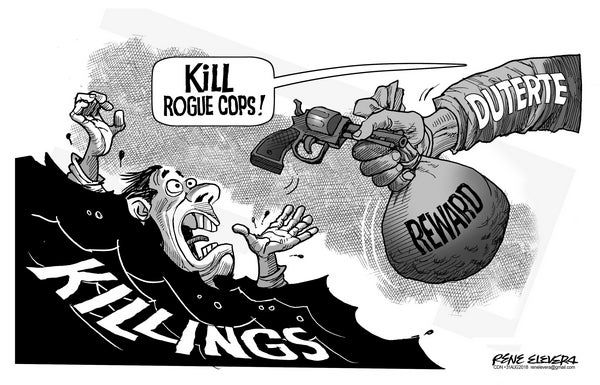 Cebu Gov. Hilario Davide III’s suggestion that the P5 million cash bounty offered by President Rodrigo Duterte to anyone who can bring a dead rogue cop be given instead to informants is noted but will anyone listen?

How does the public feel about it? Do Filipinos think the P5 million cash bounty is too much or too little? And how does one go about producing a dead rogue cop without breaking the law against murder if such laws are still respected in these violent times?

There are voices that speak out against the culture of impunity, of the ease in taking a life, but they are not being heeded enough to make the administration stop and listen.

The Commission on Human Rights (CHR) is the least respected and supported government agency, and their call for the protection of rights of rogue cops will not only be sneered at but viewed with distrust from a public outraged by the abuses of these scalawags in uniform.

But throwing cash at the problem won’t solve it nor make it go away. In fact, if President Rodrigo Duterte’s assessment is anything to go by, the ranks of the police force will be depleted fast from the bloody purging of suspected rogue cops and it won’t be filled fast enough by recruits who won’t be immune to corruption.

Despite the promises of bigger pay and maybe even easier promotion up the ranks, there will be corruption in the police force and the P5 million cash bounty and additional cash from local officials won’t cleanse its ranks.

For every cash reward, there’s a corresponding bribe matched by drug and criminal syndicates to cops willing to help advance their illicit trade. We need not go into a bidding war with these criminals for the hearts, minds and loyalty of our people in uniform.

The governor’s suggestion is but an echo of a similar reward scheme offered by governments cracking down on terrorists. And the cash reward is given to the informants, who undergo rigorous screening and validation before their tips are verified and make them eligible to receive the incentive.

Cash bounties for bringing dead rogue cops is just going too far and is a knee-jerk reaction to the rising incidence of murders of suspected drug dealers and other criminal elements.

In this setup the police have neither the patience, the willingness and the capability to ferret information from criminal suspects in order to build their cases and instead rely on summary executions to strike fear not only on lawless elements but on law abiding citizens who have every reason to be concerned about being hit in the crossfire.

Read Next
DUTERTE LASHES AT OSMEÑA