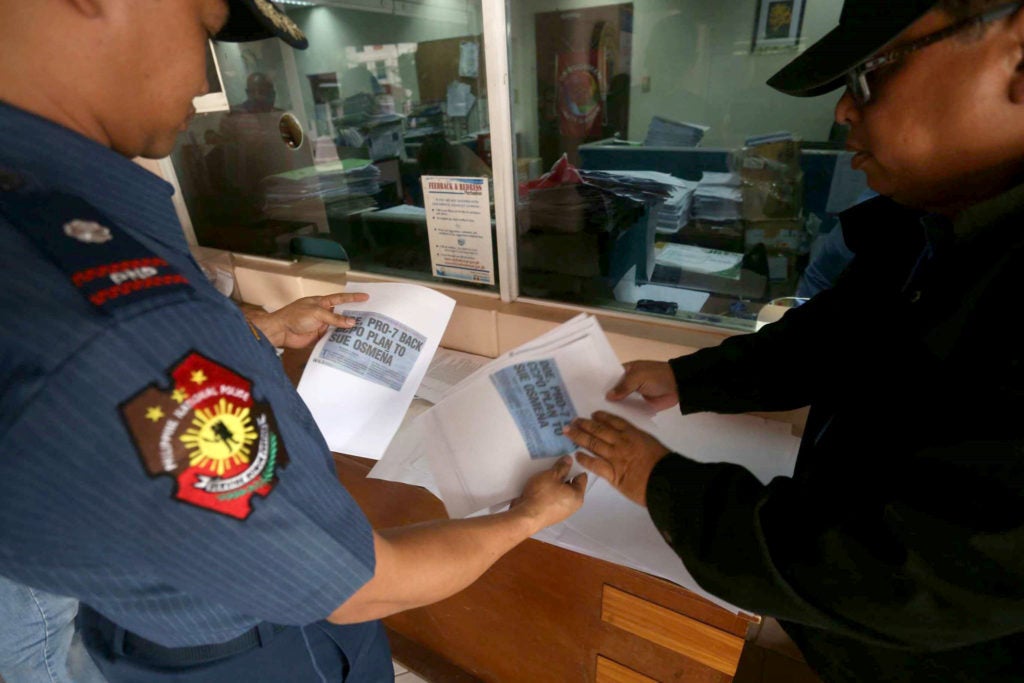 In a complaint filed at the Office of the Ombudsman in the Visayas, Senior Supt. Royina Garma, director of the CCPO, asked the anti-graft office to conduct an investigation against Osmeña for facilitating the release of three detainees who were arrested for selling butane canisters refilled with liquefied petroleum gas at the T. Padilla Public Market last August 24.

The city police chief asked the Ombudsman to hold Osmeña liable for obstruction of justice, grave abuse of authority, misconduct, a violation of the ethical standards for government employees and/or any other pertinent violations of the law.

Chief Insp. Kenneth Paul Albotra, commander of the Parian Police Station, personally submitted the complaint at the Ombudsman Visayas at around 3 p.m. on Thursday.

Attached in the complaint were the footages of the closed-circuit television (CCTV) camera at the Parian Police Station and the affidavits of the five policemen who were on duty when Osmeña went to the precinct to take custody of the three detainees identified as Ramir Amaca, Romeo Appareca, and Romeo Cueva.

“Everything was booked and recorded,” said Garma in an interview yesterday.

Copies of the complaint, she said, will also be sent to the Police Regional Office in Central Visayas (PRO-7), Camp Crame, the National Police Commission, and the Department of the Interior and Local Government.

Garma said the action of Osmeña could not be justified as no one, even elected officials, has the authority to take custody of arrested persons.

“This (case) is not to teach others a lesson. It’s a very basic rule not to intervene in any arrest or custody of suspects,” she said.

“He (Osmeña) should not have done that. Leave the police alone as we do our work. We’re not intervening with other agencies’ operations. The bottom line here is respect. Let us respect the mandate of each agencies,” she added.

Cebu Daily News sent a text message to Osmeña on Thursday to get his reaction on the filing of the case against him but he did not respond.

In his affidavit, SPO2 Protacio Meredores, desk officer of the Parian Police Station, said Osmeña went to the precinct at around 10:50 p.m. last August 24 and sought the release of the three arrested persons whom the police arrested for violating Presidential Decree Act 1865 or the law prohibiting the sale of butane canisters refilled with LPG.

“I told him that the said persons had a case and I have to seek clearance to the station commander first. But instead of answering me, the mayor told the three arrested persons in a stern and serious voice, “Panguli namo (You go home),” the policeman said.

“Moments later, the arrested persons together with their relatives went out of the room. I told the mayor that there was still no clearance from the station commander but instead he replied “Naa bay problema? (Is there any problem?),” he added.

Garma said the testimonies of the policemen and the CCTV footage would prove that they are telling the truth against Osmeña.

In an earlier interview, Osmeña said he “bends the law a little bit for poor people because of mercy.”

He said he just wanted to help people who were trying to make a living out of whatever they were selling.

“They were caught on a Friday and they’re going to be in jail the whole weekend,” he had noted.

Osmeña clarified that he did not facilitate the release of three detainees, as the policemen on duty allowed him to take custody of the butane vendors.