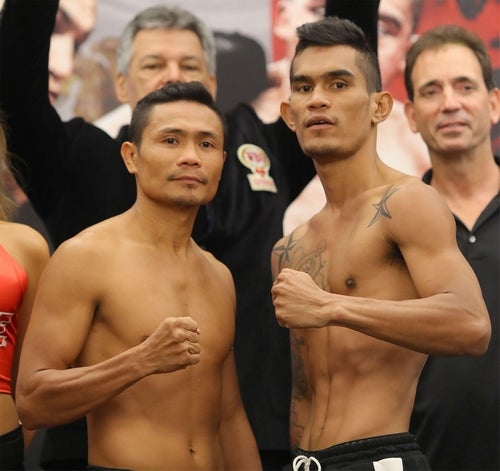 THE Philippines will take the center stage in the global boxing scene as another all-Filipino world title showdown unfolds today between three-division world champion Donnie “Ahas” Nietes and Aston “Mighty” Palicte in the Super Fly 3 fight card of HBO Boxing at The Forum in Los Angeles, California, USA.

Both will be fighting for the vacant World Boxing Organization (WBO) world super flyweight title.

Nietes, the pride of ALA Boxing Gym, tipped the weighing scales yesterday at 114.8 pounds while Palicte, promoted by Roy Jones Jr., weighed in at 114.6 pounds.

This is the second all-Filipino world title showdown after Jerwin Ancajas successfully defended his IBF world super flyweight title against Jonas Sultan last May in the United States.

Nietes and Palicte have contrasting goals in their world title showdown as the former aims to become a four-division world champion while the latter is out to prove that he is the next big thing in Philippine boxing.

The third man in the ring is California Boxing Hall of Fame inductee Jack Reiss while the three judges scoring the bout are Robert Hoyle, Daniel Sandoval, and Max De Luca.