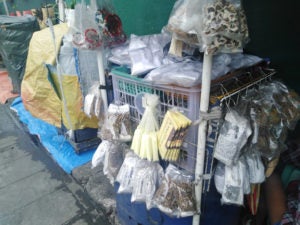 A booth selling traditional medicine along Leon Kilat street in Cebu City. Similar booths used to ahound in these areas but they have been demolished since then.

Mark and Susan have a three-month-old baby who just started teething.

At night, the young couple barely gets to sleep as their child constantly wails in pain at the growth of his first molars.

After several days of their baby’s crying, Mark and Susan finally took matters into their own hands.

The new parents decided to seek remedies from a “medicine woman” who owns a tiny stall in downtown Cebu City.

Estrella Ruiz, 69, sells alternative medicines along with several other vendors.

For close to 50 years, Estrella has been selling various types of herbs, tree barks, and powdered derivatives of roots with medicinal properties.

She also offers different types of natural incense which, she believes, could bring prosperity in business, health, and family.

Other than that, she sells talismans which claim to ward off evil spirits and avert other negative forces.

As Mark and Susan found themselves in front of Estrella’s table, the vendor immediately offered a cure for their child’s tooth pain: ‘Bato balisong,’ a kind of root.

“Daghan na og nakasuway ug magpamatikod nga kini epektibo. (A lot of people have tried this and can attest that this is effective),” said Estrella explaining that the roots were to be boiled so that the baby could sip its juice to reduce the inflammation and pain in his mouth.

“Ang kining mga tambal, gikan pa gyod ni sa mga katiguwangan. (These medicines were passed on from generation to generation),” said Estrella who gets her supply of herbs and other natural medicines from the different towns of Cebu.

The plants are repacked by the vendors according to the needs of their customers.

For the incenses, Estrella mixes the roots and herbs together in a pack; while some natural medicines like roots, branches, and herbs are pulverized and placed inside capsules as preferred by customers, she said.

The packed natural medicines come with a printed copy of a prayer or ritual that needs to be recited so that the medicines would work, Estrella added. 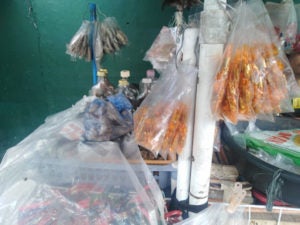 Medicine. Traditional medicine is still patronized by people who were influenced by their parents and grandparents who mainly used these herbal medicine for its curative effects. (CDN photo/ Delta Dyrecka Letigio)

The practice dates back to the Philippines’ pre-colonial times when healing was tied to the deities worshipped by the ancient Filipinos.

To heal stomach pain for example, Estrella tells her customers to recite a prayer to drive away the evil spirit that was hurting the stomach while drinking the boiled juice of a mangosteen’s skin.

According to Estrella, the medicinal value of each herb, root, or tree branch sold by the vendors is knowledge passed on by generations of traditional healers in rural areas.

Among those sold by the vendors are: Sibukaw – a type of tree whose wood and bark are used for tuberculosis, diarrhea, dysentery, postpartum tonic, skin infections, and anemia; while its seeds are also used for stomach aches and nervous disorders; Obareyna, an herb used to cure lethargy and the body pains of mothers who just gave birth; and Alum or tawas used as a natural remedy for body odor, skin irritation and sores.

Estrella recalls that there used to be more of them before the vendors were forced out of the streets by the city’s demolition team.

They later found a spot at the back of a downtown university where they could peacefully sell their medicines without fear of being demolished. 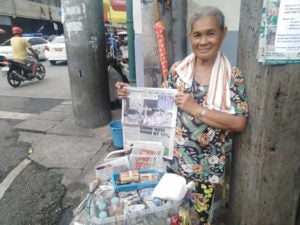 Department of Health Central Visayas (DOH-7) director, Dr. Jaime Bernadas warns the public against the use of traditional medicines as these are not governed by any standards.

“There’s a potential danger on those orally taken especially for children as there really are no standards on the dosage of these products,” Bernadas said.

Traditional medicine has been the subject of research by the Philippine Institute of Traditional and Alternative Health Care (PITAHC) since 1997.

According to Bernadas, PITAHC coordinates with DOH-7 on its move to regulate the use of traditional medicine as an alternative to commercial pharmaceutical products.

“There is little to no regulation on the use of traditional medicine and only the initiatives of some local governments on its distribution are being implemented,” said Bernadas.

While the research on traditional medicine continues, Bernadas advices the public to visit health centers and avail of professional medical care when ill.

“Our government health centers are free and the medicines are free. As much as possible, go to a doctor when you are sick,” said Bernadas.

But for Mark and Susan, natural medicines sold along the sidewalk of Leon Kilat Street are a better alternative to their barangay health center, which is often full though the services are free.

Estrella said that they will continue to sell traditional medicines for as long as there are people like Mark and Susan.

As most people now would much rather consult their doctors, over the years, the vendors have noticed a decline in the number of customers.

But their industry will remain if only for those who still believe that it is best to go natural.

Read Next
Perfect no more