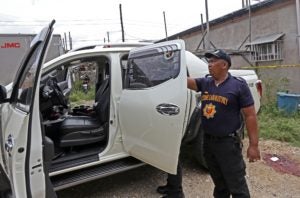 MANDAUE BUSINESSMAN AMBUSH/SEPT. 12, 2018: Scene of the Crime operatives (SOCO) try to gather some evidences inside the SUV vehicle of businessman Jayson Sy Chiaoco after he was ambush while desembarking the vehicle at H.Cortes street barangay Cabangcalang Mandaue City.(CDN PHOTO/JUNJIE MENDOZA)

A Filipino-Chinese businessman was killed early morning of Wednesday after a lone gunman shot him in the head at the victim’s business establishment located at Hernan Cortes St. Barangay Cabancalan, Mandaue City.

Johnson Sy Chiaoco, 58, a resident of Greenville Heights, Sitio Tolo-Tolo, Consolacion, Cebu was rushed to a private hospital in Mandaue reclamation area but was declared dead on arrival by attending physicians.

The victim was the proprietor of Mega Eurostar Corp. with office and a paint store at Hernan Cortes St. in Barangay Cabancalan, Mandaue city.

According to Chief Insp. Zosimo Jabas, Chief of the Casuntingan Police Station, the victim has just disembarked from his Nissan Navarra pick up truck at the back of his store when an unidentified man wearing a bonnet and dark jacket entered the gate, approached him and without any provocation shot the victim once in the head.

The suspect then retreated back to the street where a companion on a motorcycle was waiting.

SWAT operatives, the police and Casuntingan PNP immediately conducted road blocks but failed to collar the suspects as of presstime yesterday.

Scene of the Crime Operatives (SOCO) found a spent cartridge of .45 caliber pistol at the crime scene and a bullet hole at the upper window glass at the back of the driver believed to be coming from the slug that hit the victim.

Jabas said they have reviewed the footage from the CCTV installed a few meters from the crime scene but still failed to identify the gunman due to a pixelized capture.

Jabas said they will conduct further investigation and will particularly look on the business and work-related angles as motives in the killing.

Cordova ‘shabu supplier’ killed
Meanwhile, a high value target suspected to be the source of shabu in Cordova town, was killed in a police operation at Barangay Tangke, Talisay City, Cebu after having been reported of committing child rape.
“Initially, he was reported to have committed rape and during the pursuit operations, the suspect fired at the police immediately,” said Senior Superintendent Manuel Abrugena, director of the Cebu Provincial Police Office (CCPO).

Drug enforcement units (DEU) from the Talisay City Police Station and the Regional Mobile Force Battalion (RMFB) were to arrest a certain Billy Baguio after a concerned citizen reported to the police of the
alleged rape.

However, after seeing the operatives, Baguio
reportedly fired at the cops prompting the latter to fire back hitting Baguio in different parts of the body killing him instantly.

Police recovered a pistol, six small packs of suspected shabu, and drug paraphernalia from the suspect.

Abrugena said that Baguio was tagged by one of the suspects nabbed in the Cordova buy bust on Tuesday as one of his sources of illegal drugs.

“After the firefight, that was the only time that this person (Baguio) was identified as a gun-for-hire and a high-value target drug trader,” said Abrugena.

The Cordova bust nabbed three personalities including a minor with at least 15.6 grams of white crystalline substance believed to be shabu amounting to P181,602.

Read Next
Sinas admits war on drugs is far from over