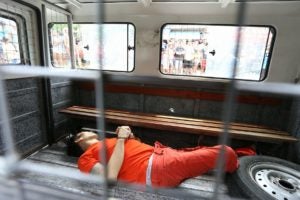 Two personnel from the Cebu Provincial Detention and Rehabilitation Center (CPDRC), and a male inmate were killed in an ambush at Unit 5 in Barangay Kalunasan, Cebu City at past 9 a.m. on Thursday (September 13).

The fatalities were identified as Prison Guard 1 Bernie Bayutas, the driver Joel Tevez, and Jerryfer Perigrino, who was considered as a high-profile inmate and was detained for drug charges.

Based on the initial police investigation, the victims were on board a CPDRC-owned vehicle when the incident happened.

The inmate who rode the vehicle was about to be filed charges for the drugs seized in his cell during a greyhound operation conducted last August.

Four medium packs of shabu and drug paraphernalia were found inside the cell of Peregrino after a greyhound operation on August 4.

In 2016, it was reported that red car allegedly owned by Perigrino was being parked inside CPDRC.