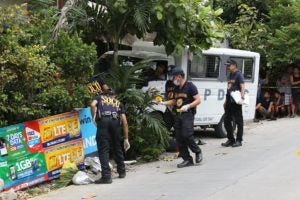 Jail warden Reynaldo Valmoria of the Cebu Provincial Detention and Rehabilitation Center (CPDRC) believes that the conflict in the drug trade was the motive in the ambush of high-profile drug inmate Jerryfer Perigrino.

Valmoria said Perigrino had divulged names of drug personalities that operate in CPDRC during an interrogation after he was caught with medium packs of shabu during a greyhound operation last August.

The jail warden said that the two jail guards who escorted Perigrino to the city courts have a pending case before the Committee on Discipline and Investigation (CODI) and were among the jail guards who were being monitored for possible involvement in drugs.

Valmoria, however, said the jail guards, who had served for 15 years in CPDRC, will be given death benefits since they died while in the performance of their duties.

The two jail guards escorted Perigrino to Quimonda IT Center Complex, where the Cebu City Regional Trial Court is located for the filing of a case against him following the discovery of drugs and paraphernalia from his possession during the recent greyhound operation inside the detention center.

Read Next
All CPDRC jail guards under investigation