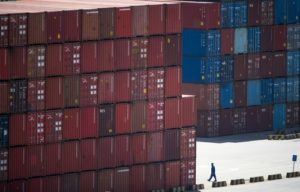 China said the “escalation of the trade conflict is not in the interest of either party.” | AFP

China welcomed on Thursday a US offer to hold fresh trade talks, adding that the two are discussing the details and providing some hope the world’s top economies could step back from the brink of an all-out trade war.

The sides have been engaged in an escalating tit-for-tat trade fight for months but on Wednesday it emerged that US Treasury Secretary Steven Mnuchin had invited top Chinese officials to discuss the issue.

“The Chinese side believes that the escalation of the trade conflict is not in the interest of either party,” commerce ministry spokesman Gao Feng told reporters at a regular news briefing.

Beijing “has indeed received an invitation from the US and holds a welcoming attitude to it,” said Gao, noting the “two sides are still communicating on the specific details.”

News of the invite comes as it emerged Thursday that US firms in China are beginning to feel the pinch of tariffs already imposed on the Asian giant.

Mnuchin’s offer comes just under a week after US President Donald Trump threatened to impose tariffs on all $500 billion worth of imports from China.

The possible resumption of negotiations sent Asian markets rallying with Hong Kong surging 2.5 percent — having fallen for six straight days and into a bear market — and Shanghai more than one percent higher.

Trump imposed his first phase of tariffs this summer on $50 billion of Chinese goods, including high-end technology parts and manufactured goods, while Beijing fired back dollar-for-dollar at US soybeans, autos and other farm goods.

Top White House economic advisor Larry Kudlow told Fox Business Network on Wednesday: “Secretary Mnuchin, who is the team leader with China, has apparently issued an invitation. Talking is better than not talking, so I regard this as a plus.”

The next wave of 25 percent tariffs on a further $200 billion in imports will loom over any talks — after a public consultation period for affected businesses came to an end last Thursday.

Beijing has pledged to hit back with 5 to 25 percent tariffs on $60 billion in US imports in retaliation for any measures from the US.

The majority of American companies in China say they are hurting from the escalating trade spat, reporting increased costs, lower profits and stepped-up scrutiny, according to an American Chamber of Commerce in China survey released Thursday.

The business lobby urged Washington to reconsider its approach.