Nuns get hands dirty and wet to save Mexico’s salamanders 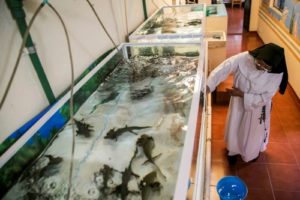 ROLLING up the sleeves of her immaculate white habit, Sister Ofelia Morales Francisco plunges her hands into an aquarium, grabs a large, slimy salamander and lifts it dripping into the air.

The nun is part of a team at a Dominican convent in Mexico that is fighting to save the Lake Patzcuaro salamander, a critically endangered species.

Revered as a god by the indigenous Purepecha people and keenly studied by scientists, the salamander — known for its stunning ability to regenerate its body parts — is found in the wild in only one place: the lake near the Convent of Our Immaculate Lady of Health, in the western town of Patzcuaro.

But the lake is badly polluted, and that is where Morales and her sisters come in.

They have launched a program to raise the salamanders in captivity, and hope their efforts will one day help the species — Ambystoma dumerilii — make a comeback in the wild.

It is a job that has required the nuns to step outside their routine of charity and prayer, and get their hands dirty in a field they knew little about at first.