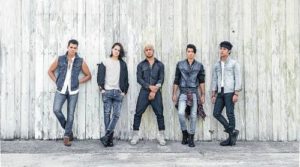 TOPPING the charts across the globe with their latest self-titled album, and big winner at the recent Teen Choice Awards, CNCO, the powerhouse band redefining Latin music worldwide is coming to the Philippines as part of their Asian Promo Tour.

Catch these heartthrobs this afternoon at 5 p.m. as they perform for Cebuanos at the Northwing Atrium of SM City Cebu.

CNCO has just unleashed their latest hit single, “Se Vuelve Loca” which is a vibrant track that’s sure to become a summer anthem.

Widening their reach, the single release is accompanied by a Spanglish version of the track.

Bilingual and English-speaking audiences will be able to enjoy this new take on the song, which follows the band’s global vision.

Drawing from CNCO’s unique affinity for dancing and energetic personalities, the video for “Se Vuelve Loca” is sure to satisfy devoted fans and bring new audiences along for the ride.

The video was directed by David Rousseau, who previously worked with musical giants such as, Christina Aguilera, Enrique Iglesias, MAGIC!, Shakira, and Nicki Minaj.