PH economy spent more dollars than it earned in 6 months 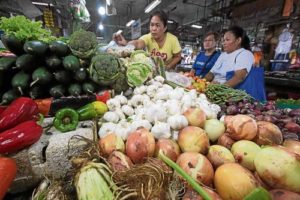 The reduced shipment of vegetables contributed to the drop in country’s exports.
/Inquirer file photo

The Philippine economy spent substantially more than what it earned through foreign trade in the first half of 2018, with the resulting currency outflows further depressing the value of the peso against the US dollar.

In a statement, the Bangko Sentral ng Pilipinas (BSP) said the country’s current account posted a deficit of $3.1 billion in the first six months of the year.

This was markedly higher than the $133 million deficit recorded in the same period in 2017.

At this level, the current account — which tallies the country’s trade surplus of gap with the rest of the world — already hit the $3.1-billion full year target of the central bank only halfway into 2018.

The trade deficit for the first half of 2018 rose by 27.9 percent to $23.3 billion as imports of goods expanded by 10.7 percent while exports of goods declined by 1.6 percent.

Contributing largely to the decrease in export goods were lower shipments of coconut products (22.9 percent), and fruits and vegetables (16.4 percent).

These offset the moderate growth in other commodity groups during the period.