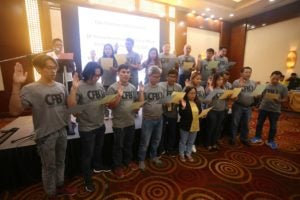 The new set officers of the Cebu Federation of Beat Journalists (CFBJ) took their oath during their general assembly on Wednesday (September 19).

Mitchelle Palaubsanon took over Elias Baquero as president of the federation.

Baquero served as president of the CFBJ for 14 years.

In her speech, Palaubsanon promised to fight fake news, which she said have created chaos and confusion.