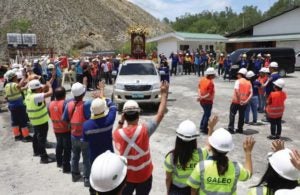 Field personnel (above) and administrative staff (below, right) of Carmen Copper Corp. show their reverence to the Sto. Niño image.

A Sto. Niño devotee since she was a child, 48-year-old Geolina Abella said that she would never miss visits to the Basilica Minore del Santo Niño in Cebu City during the annual feast of Cebu’s patron each January.

But while Geolina always wanted to line up inside the church along with thousands of devotees for a chance to kiss the holy image of Señor Sto. Niño de Cebu, financial contraints would force her back immediately to her home in Toledo City.

Lining up would take at least two to three hours of her time and according to Geolina, the long wait would mean spending money to pay for her meals while in the city.

“Talagsa ra pud kaayo ko maka pang hawok sa Sto. Niño kay wala man koy kwarta nga ika istar sa Cebu ug dugay (I seldom have the chance to kiss the Sto. Niño because I do not have money to spend for my stay in the city),” she said.

Geolina only had enough to pay for her bus fares. A one-way trip from Toledo City would already cost her between P80 to P100.

Because she often had no money to cover for meals in Cebu City, Geolina said that she would often find the time to see the Santo Niño image up close only after the Sinulog fiesta celebration when the long lines have gone.

She last visited the basilica in July.

On Thursday, Geolina got a rare treat when the image of Sto. Niño from the basilica was brought to Toledo City at the compound of Carmen Copper Corporation (CCC) in Barangay Don Andres Soriano (DAS).

The visit was one of the highlights of this month’s 14th year anniversary of CCC’s incorporation.

CCC is a subsidiary of Atlas Consolidated Mining and Development Corporation (ACMDC).

“Nalipay kaayo ko kay sukad-sukad karon pa ni siya ni du-aw nganhi (I am very grateful because ever since, this is the first time that the Sto. Niño visited us),” Geolina told Cebu Daily News.

She was among the more than two hundred people, led by CCC President and CEO Roy Deveraturda, who crowded CCC’s recreation center to welcome the image and hear Mass that was concelebrated by basilica rector, Rev. Fr. Pacifico Nojara Jr., OSA and Fr. Rolando Manayon, parish priest of Toledo City’s Our Lady of Mt. Carmel.

The Sto. Niño’s image was mounted on a black van during its travel to Toledo City located around 28 kilometers southwest of Cebu City at 9 a.m. on September 26.

It was the very same image that the congregation would use during the annual fluvial procession each Saturday before Sto. Niño’s fiesta celebration — held every third Sunday of January.

Accompanied by Fr. Nojara, the image was first brought to the CCC clubhouse for welcome rites at around 10:30 a.m.

Thirty minutes later, the Sto. Niño image was taken to a CCC pickup that was adorned with flowers, in preparation for a short road trip to the mines.

Traveling at a 10 to 20 kph speed, the image visited the compound’s machine shop, materials management department, ASSAY lab, Mine Open Pit (MIP), mill administrative office, depot, warehouse, hospital and administrative office during the tour which lasted for an hour and a half.

Employees waited outside their offices to greet the miraculous Sto. Niño image.

Some devotees waved white, yellow, red and blue flaglets as the image passed by.

There were also those who carried their own images of the Sto. Niño.

Along the road, outside the CCC buildings, small altars adorned with flowers were mounted.

Sofia Picardal, CCC’s Sr. Corporate Communications Officer, said that most, if not all, of their departments had their own chapel and patron saints.
Employees also celebrate their own fiestas every year.

“Ang mga minero religious kaayo (The miners are very religious), maybe because of the nature of their jobs,” Picardal said. 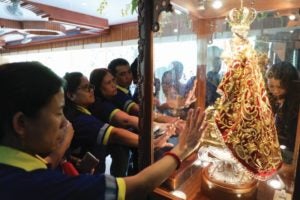 Geolina, a resident of Barangay Pandong Bato, said she heard of the Sto. Niño’s visit from CCC mine employees.

Her husband Rosario, 52, has been working as a contractual welder at the mine for at least two years now.

Rosario used to work in Cebu City, but transferred to Toledo City in 2016 so he could be closer to his wife, six children and six grandchildren.

Geolina together with her grandson Jamby, 4, boarded CCC’s service bus and traveled for 30 minutes to the compound’s recreation center to attend the 1 p.m. vigil and 3 p.m. send off Mass.

“Ni ari gyud ko aron mangaliya para sa maayong lawas ug trabaho (I came here to pray for good health and employment),” said Geolina adding that the family never runs out of food on the table even if her husband does not earn much as a welder.

One of her children now works at a factory in Lapu-Lapu City to help support their needs, she said.

After the mass, she joined CCC employees and other guests in lining up to kiss and touch the glass case of the Sto. Niño image before it left the CCC compound at 5 p.m.

In his homily, Manayon said that while the Sto. Niño is just a boy, he understands all of our prayers.

“Bata apan Ginoo. Siya ang atong kadaganan (He may be a child but he is God. We can always run to him for help),” he said.

In his message, Nojara thanked CCC officials, employees and residents of surrounding communities for the warm welcome.

“Ang imahen ni Señor Sto. Niño dili exclusibo kun dili para sa tanan (The image of the Sto. Niño is not exclusive but it is for all of us),” he said.

The Sto. Niño, he said, always hears those who seek his help.