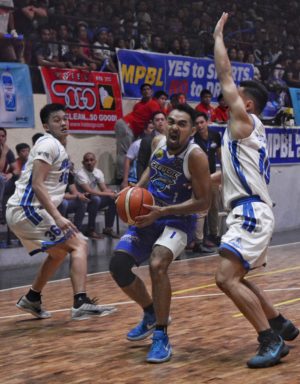 There’s no other place more suitable to play your best than at your homecourt as the Cebu City Sharks-Casino Ethyl Alcohol took advantage of some good old home cooking and took down the Makati Skyscrapers, 70-66, in the Maharlika Pilipinas Basketball League (MPBL) Datu Cup on Saturday night at the raucous University of San Jose-Recoletos Coliseum.

“Pride lang talaga. We just wanted to play with pride in front of our fans and family,” said a jubilant Patrick Jan Cabahug, a former University of the Visayas Baby Lancer, who led the Sharks with 22 points and seven rebounds.

Playing inspired basketball in front of their adoring fans and family members, the Sharks led by as much as 20 and fought off a comeback attempt by the Skyscrapers, thanks to clutch shots from sniper, Cabahug and Harold Cincoflores to help Cebu City get its second win in 10 games.

Ex-University of San Carlos big man, William McAloney, also had solid game with a double-double of 13 points and 10 rebounds to go with two assists and a blocked shot.

The Sharks got off to a strong start, leading by 11 after the first, 20-9, behind the combined 15 points of Cabahug and Rhaffy Octobre. They remained in front, 37-27, at halftime but raised it to 20, 54-34, behind the spirited play of Victor Nunez, who scored all six of his points in the third.

Makati, however, was still not done as a 12-2 rally capped by a deuce by Jerald Bautista brought the Skyscrapers to within seven, 53-60. But Cebu City responded with two straight triples from Cabahug from the right corner to bring the lead back to 13, with 4:57 to go.

The Skyscrapers last threatened at 64-68 after a triple by Rudy Lingganay, a putback by Mark Isip and a steal and layup by Jeckster Apinan, with 49 seconds remaining. They even had a shot to come closer after Cebu’s Cesar Catli lost the ball at the sideline. But the Sharks’ defense held its ground, forcing the Skyscrapers into a turnover. McAloney then put the win on ice with two free-throws with 20 ticks left.

Ablaza and Bautista had 10 points each for a Makati side that shot just 32 percent from the floor. They also shot themselves in the foot from the charity stripe, where they missed 13 of their 34 attempts there.