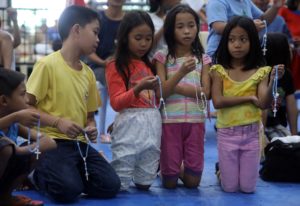 A PLEA TO THE HEAVENS. Young landslide victims at the evacuation center pray the afternoon rosary for their loved ones who perished in the deadly Naga City landslide. CDN PHOTO/TONEE DESPOJO

Though trials may not be easy to understand, be grateful in the midst of difficulties and suffering.

Such was the message relayed to Nagahanons by a Catholic prelate as the City of Naga celebrated its annual fiesta, yesterday, October 10 .

The celebration came nearly three weeks after a massive landslide hit the city’s Barangay Tinaan last September 20 which claimed at least 78 lives and left thousands of others homeless.

Delia Pañares, a 67-year-old evacuee from the landslide-stricken village, has kept her faith inspite of the tragedy.

Pañares told Cebu Daily News that she made sure not to miss any of the novena prayers to St. Francis de Assisi, patron saint of Naga City.

Since October 1, the prayers were held at the Enan Chiong Activity Center (ECAC), an evacuation center.

“It has been my practice to hear the novena masses during the fiesta celebrations. This year, I pray the holy rosary and the novena here in the evacuation center,” said Pañares, who lived in Purok II Sitio Sindulan, Barangay Tinaan prior to the landslide.

Panares listened intently as Cebu Auxiliary Bishop Oscar Florencio delivered his homily before the landslide victims and called on them to be happy for their blessings.

Florencio, who officiated the Pontifical Mass for the city’s fiesta, said that while it is still difficult to understand, people may soon see the purpose of God in allowing such a tragedy to happen.

“In the midst of the difficulties and sufferings, we should always learn to be thankful to God. It is not easy to understand but that is what we need to bear in mind always,” said Florencio.

He also urged the Nagahanons to treat the landslide as a wake-up call to renew care for the environment and heed to the teachings of the city’s patron, St. Francis, the patron saint for animals, merchants and the ecology.

“Let us read the sign of the times. What do we do after this? Will we continue to not care (about the environment). Because if that were so, then we have not learned from the teachings of our patron and all these prayers now are useless,” said Florencio in Cebuano.

Naga City Mayor Kristine Vanessa Chiong has yet to receive a geohazard assessment of the landslide area from the Department of Environment and Natural Resources (DENR).

She said that she has already contacted DENR Undersecretary Benny Antiporda to remind.

“I’m sending another communication to Secretary Roy Cimatu to inform him that we are still waiting for the geohazard assessment. I have been informed that another team of geologists will be coming either today or tomorrow but I don’t know for what specific purpose,” said Chiong.

Chiong lamented that the delay in the geohazard assessment also leads to delays in the local government action on the fate of about 7,900 evacuees awaiting word on whether they would be allowed to return to their village.

Chiong said that some evacuees have already approached her asking for an assurance on when they can be sent home.

“Some of them whose homes belong to the critical zone initially delineated by the MGB (Mines and Geosciences Bureau) already know that they cannot go back anymore. But they wanted to be assured on where will they go and the others who are located outside the critical zone are also getting anxious to go home,” said Chiong.

“Although we are providing them with utmost assistance in the evacuation centers, para nila lahi ra man gyod nga naa sa balay (to them home is really different) and they are really looking forward to go home,” she added.

The Cebu Provincial Environment and Natural Resources Office (PENRO), for its part, also needs to complete the assessment of quarry sites in Cebu before they could lift the suspension of the small scale quarry operations in the province.

Lozano said that PENRO is doing its best to come up with its findings immediately so that approved companies could resume operations.

Sites which are believed to be susceptible to geohazard will be inspected with the assistance of the Mines and Geosciences Bureau (MGB).

Lozano cited a portion in Barangay Cantao-an, Naga City, as one of the sites susceptible to landslides.