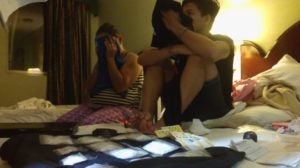 The Abellana station of the Cebu City Police Office seized at dawn today an estimated P2.8 million worth of suspected shabu.

The drug enforcement unit (DEU) of the Abellana Police led by Chief Inspector Eduard Sanchez, precinct commander, seized the drugs from a female high-value target, Mary Jane Dequitos, 36, and her three cohorts during a buy-bust operation inside a hotel in Barangay Capitol Site, Cebu City.

Inspector Gomercendo Mandawe, the deputy chief and DEU team leader of the Abellana police, said Dequitos tried to hide her identity by claiming she was Apple Lipetin but the police were not fooled.

Arrested along with Dequitos were Jhon Frye Tapales and two others.

Dequitos and her cohorts, all residents of Barangay Tejero in Cebu City, are now held at the jail facility of the Abellana Police Station.

Read Next
CRIMES ON THE RISE?