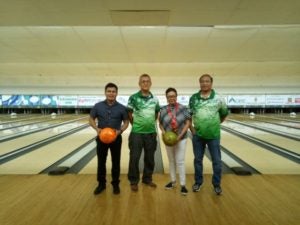 WITH THE number of participants that showed up in the 10th Cebu Tenpin Bowling Association (Cetba)- National Bowling Tour (NBT) Open Tenpin Bowling Championships 2018 last Tuesday at the SM City Cebu Bowling Center, it seems that the sport of bowling is headed towards the right direction.

Starting with only 80 participants, the event has grown as it has gathered more than a hundred bowlers this season.

Among the hundred are keglers coming from Luzon, Mindanao and other parts of the Visayas region.

“This is more than what we had in the previous years,” said Cetba vice president Docdoc Gothong during the opening.

“And it is not just the participants but also our (Cetba) members, especially our junior bowlers.”

According to Cetba officials, the group started to develop and introduce the sport to youngsters.

“We hope that more will join the sport’s grassroots program. We also hope that these tournaments will do major roles in the promotion of the sport,” Abing said.

Magpale, the guest of honor, said during her speech that the sport and Cetba have the full support of Cebu province.

“You only have to whisper to me what you really need to promote the sport, and Cebu province will help you,” Magpale said, addressing it to Cetba President Eric Bucoy.

The tournament will run up to November 11 and features Open and Senior Masters categories.

The prestigious event is sanctioned by the Philippine Bowling Congress (PBC) and NBT.