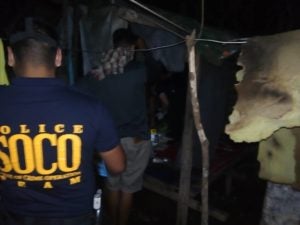 A 35-year-old suspected drug peddler was killed during a police operation in Purok Tambis, Barangay Umapad, Mandaue City at past 6 p.m. on Wednesday (Nov. 14).

Aldrin Cartociano died after suffering several gunshot wounds in his body when police officers fired at him as he tried to pull out a gun when he realized that the man he was dealing drugs with was a police officer during the buy-bust operation, said Senior Insp. James Conaco, Opao Police Station chief, in a phone interview on Wednesday.

Five police officers conducted the buy-bust operation on Wednesday in one of the shanties in the middle of a mangrove area in Purok Tambis after they received information about the illegal activities in the area.

Conaco said that Cartociano allegedly reached for his firearm when he realized that the man he was dealing illegal drugs with was an undercover police officer.

He said that the police team backing the undercover agent fired first to neutralize the suspect.

Conaco said that they were looking into the background of the slain suspect especially since he was not in the police drug watchlist.