Car used in cop’s slay being traced by LTO 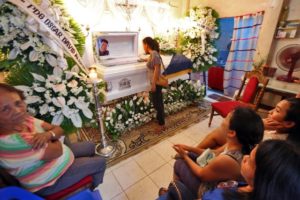 Chief Inspector Verniño Noserale, chief of the Minglanilla Police Station, said that the car allegedly used by the killers of PO2 Lord Romyth Cañada who was shot dead last November 14 in Minglanilla town, south Cebu, is now being traced by the Land Transportation Office (LTO) to help identify its owners and unmask the killers.

“We are now waiting for the results of the LTO that is tracing the plate number of the car seen in the CCTV (closed-circuit television),” said Noserale.

The plate number of the blue car was clearly seen through the footage.

Noserale however, said that even if they have the car’s plate number, this is not a guarantee that the identity of the killers will be known.

“Based on our experience, criminals will usually use fake car plates to avoid detection,” said Noserale.

“The plate number may not match the car or may not even be registered at all,” he added.

Noserale positively identified the car unit as a dark blue Suzuki Sedan, which also matched the statements of some witnesses who claimed they saw a masked man disembark from a blue car before shooting Cañada multiple times.

Noserale admitted that even with the CCTV footage, identifying the suspects remains to be a big challenge as their facial features remain unclear in the video.

“We can only compare the height, the body structure, and general features. Yet it will be difficult to identify the exact culprits through the video alone,” he said.

Noserale also said that the culprits may have already left Minglanilla since they can no longer find it in the town when they conducted their followup operation.

The footage captured by the CCTV camera of Barangay Calajo-an, Minglanilla revealed that at the time of Cañada’s killing, a blue car passed twice at the crime scene which was located near an auto-repair shop where the slain policeman and his brother-in-law, Ken Echavez, had just come out from.

The second time it passed, the car could be barely seen in the footage as it stopped for a few seconds before moving towards the camera.

A footage recorded at 10:59 a.m. of November 14 also showed the blue car stopping as two men came running towards it and entered the vehicle from both sides of the passenger seats before speeding away.

Cañada died on the spot after being shot multiple times in the body while Echavez was injured on the forehead.