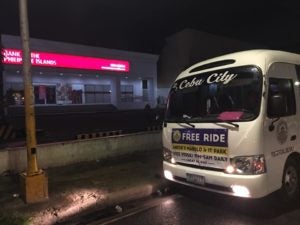 This city-owned coaster which ferries passengers to I.T. Park from Barangay Mabolo and vice-versa will soon be replaced by a
Kaohsiung bus which can accommodate more passengers.

THE success of the free bus rides being offered by the city for workers from the business processing outsource (BPO) industry has prompted the Cebu City Government to expand its coverage, and add another route.

Nanette Garong, director of the city’s call center program, announced that they might deploy another bus to ferry passengers to and from Panagdait area in Barangay Mabolo.

Garong said Panagdait was tagged by BPO firms and workers as the second most risky area next to the intersection of Juan Luna Avenue and M.J. Cuenco Avenue.

“That area in Panagdait, it was also identified during our meeting with BPO companies and call center agents as another high risk area. We’re still determining whether or not we will be deploying a coaster bus or a Kaohsiung bus,” said Garong.

She added that the new route will have its dry run this Monday, November 19.

However, they are yet to discuss and come up with the finalized route as well as the schedule of trips for the Panagdait bus.

If implemented, the Panagdait route would be the fourth free bus ride the city government has deployed to ensure the safety of call center in I.T. Park.

Presently, a total of five buses are being deployed in I.T. Park to ferry agents on graveyard shifts to several points in Cebu City including Barangays Mabolo, Lahug, Hipodromo, Capitol Site, and Metro Colon.

On the other hand, Garong informed that they have replaced the 30-seater coaster bus assigned at the intersection of Juan Luna Avenue and M.J. Cuenco Avenue with a Kaohsiung that can carry up to 40 passengers since Wednesday (November 14).

This is done, she said, because of the dramatic increase in the volume of passengers in the said area since its dry-run last Monday (November 12).

“We also needed a bigger bus in order to transport more passengers because we noticed that some of them availed the free bus ride so they can go to work earlier and safer,” Garong explained.