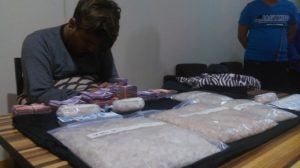 Cebu City police scored big in their anti-illegal drug campaign with the confiscation of nearly P40 million worth of suspected shabu and the arrest of a high value target in their drug watchlist on Sunday in Barangay Tisa, Cebu City.

Three kilos and 300 grams of suspected shabu with an estimated Dangerous Drugs Board value of P39 million were confiscated during the buy-bust operation on Sunday dawn in an apartment in San Jose Extension, Caimito St. in Barangay Tisa, said Chief Insp. Regino Maramag, Pardo Police Precinct chief, in a phone interview on Sunday.

Jeffrey Jade Cabaron, whom Maramag described as a high value target in their drug watchlist, was also arrested during the operation conducted by the Drug Enforcement Unit of the Pardo Police Precinct.

Maramag said that they had been after Cabaron of Barangay Pasil for quite awhile now and had finally caught up with him on Sunday.

Senior Supt. Royina Garma, Cebu City Police Office chief, went to the apartment in Tisa rented by Cabaron on Sunday to congratulate Pardo Police officers for their achievement and to be updated on the arrest of Cabaron.

Garma said that the P39 million worth of suspected shabu was one of the biggest drug haul by the police under her watch.

Cabaron was detained at the Pardo Police Precinct detention cell pending the filing of charges.