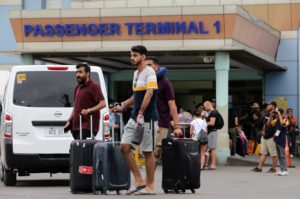 Hundreds of passengers including foreign tourists were left stranded at Terminal 1 Pier 1 after the Philippine Coast Guard canceled all boat trips
due to Tropical Depression Samuel. | CDN PHOTO/ JUNJIE MENDOZA

As Tropical Depression Samuel poises for landfall, the state weather bureau issued an urgent flood alert as Cebu is expected to experience torrential rains tomorrow, at 90 millimeters of rain per hour.

The weather is expected to worsen today with heavy rains.

Samuel is expected to make landfall today near Dinagat Island and Southern Leyte and is expected to move towards Central Visayas and make a second landfall in Bohol early Wednesday morning then in Cebu later in the day.

Classes were canceled yesterday afternoon, and close to a thousand passengers were left stranded in various ports of Cebu with the cancellation of boat trips brought about by storm signal no. 1 which was hoisted by the Philippine Atmospheric, Geophysical and Astronomical Services Administration (Pagasa) at 5 p.m. yesterday.

All local government units (LGUs) in the province, including the cities of Cebu, Mandaue, Lapu-Lapu and Talisay, declared the cancellation of classes from pre-school to senior high school.

Pagasa’s severe weather bulletin issued at 5 p.m. yesterday showed that Samuel’s eye was spotted 505 kilometers east of Hinatuan town in Surigao del Sur, and is likely to develop into a Tropical Storm today.

Samuel is the 19th major weather disturbance to enter the country this year.

Due to its wide diameter, reaching up to 350 kilometers, the entire Cebu island will be directly affected.

“We are expecting its landfall at the Eastern Visayas – CARAGA region on Tuesday (November 20), then it will move northwest to Bohol and Northern Cebu on Wednesday morning,” said Quiblat.

Samuel has gained speed as it approaches the Eastern Visayas- Caraga region and is now moving at 25 kilometers per hour (kph) from its original speed of 15 kph and has maintained its strength, packing winds up to 55 kph, and gustiness of up to 65 kph.

Quiblat said Samuel is not likely to bring strong winds due to the huge amount of rain it carries as it makes its way through Mindanao and Visayas.

He said that Samuel, which state meteorologists likened to Tropical Depression Urduja, will bring rainfall with a rate of 90 millimeters per hour.

Urduja was characterized with heavy rains instead of strong winds when it hit the Visayas in December 2017 which resulted to flash floods and landslides in the Samar provinces and claimed the lives of 43 individuals.

Anything beyond 35 millimeters per hour is torrential (red-warning), and preemptive evacuation, especially in low-lying areas, is urged to avoid casualties.

“If Samuel’s track will not change, heavy rains in Cebu are expected to last until Wednesday afternoon. By then, we can expect improvement in the weather condition,” Quiblat explained.

A total of 18 areas were placed under Storm Signals by Pagasa as of yesterday afternoon.

Meanwhile, data from the Philippine Coast Guard in Cebu (PCG – Cebu) recorded a total of 960 passengers, who were left stranded in different ports of Cebu as of 4 p.m. yesterday, when sea trips were canceled .

Their data also showed that a total of 28 RoRo (roll on-roll off) cargo ships, 23 sea vessels and 25 motorbancas were no longer allowed to leave their ports of origin since noon yesterday.

Around 12 vessels have also opted to take shelter in safe areas together with 92 other motorbancas.

Since no sea vessels were allowed to set sail starting yesterday noon, bus trips to Dumaguete City from the Cebu South Bus Terminal were also canceled until further notice. 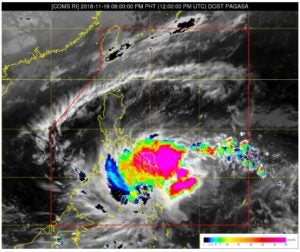 PCG – 7 Spokesperson LTJG Michael John Encina said there are still travelers who stayed at the terminal while awaiting the resumption of their trips.

Disaster teams from all LGUs in Cebu, and those from the national government such as the Office of Civil Defense – 7 (OCD – 7) and PCG – Cebu, are now on blue alert, and will likely hoist the red alert status today, Tuesday .

Once the red alert status is up, all rescuers and responders will be deployed to start monitoring for any signs of imminent threats, such as flash floods and landslides, within their areas of jurisdiction.

Baltazar Tribunalo Jr., head of the Provincial Disaster Risk Reduction and Management Office (PDRRMO), said they are monitoring areas near the major river systems in Cebu including Malabuyoc, Argao, San Fernando, Pinamungajan, Tuburan, and Asturias for possible flash floods. Tribulano said that they are also monitoring landslide prone areas such as in Carmen town, and Naga City, where the landslide last September resulted in the death of 78 individuals.

The Mines and Geosciences Bureau – 7 (MGB – 7) warned the residents of Barangay Tinaan in Naga City to be alert because the heavy rainfall may cause the softening of the soil debris from the recent landslide. /with Morexette Marie B. Erram and Nestle L. Semilla