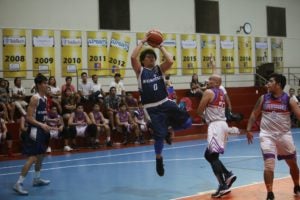 CAPTION: Accenture’s Ryan Veloso rises up for a jumpshot in a game against Teleperformance. Contributed photo

The Accenture Sharks bested the Teleperformance Vipers, 65-53, to tighten their grip of the top spot in the Elite Classic division of the 2018 Tanduay Athletics E-Leagues for Basketball on Saturday at the City Sports Club-Cebu.

Former Cesafi standouts Sherwin Resilla and Junas Misa shone bright as they each had 13 points with the former adding 11 rebounds, three assists and two steals, and the latter chipping in nine boards.

The Sharks asserted themselves in the second period where they outgunned the Vipers, 22-10, to erect a 37-27 halftime lead. They kept Teleperformance at bay until the final buzzer to boost their win-loss record to 14-1.

Meanwhile, the Sykes Pioneers boosted their record to 10-3 after they beat the Wipro Tigers, 70-65.

Janjan Auditor pushed Sykes to the victory that placed them in third place as he tallied a double-double of 29 points and 11 rebounds laced with three assists and two steals.

In the Evo League, the undermanned Tech Mahindra Mighties pulled off a 71-69 win over the Dyninno Jets.

Even with just six players suiting up, the Mighties still managed to get the victory behind the efforts of Carlo Ocariza and Robert Rebano.

Ocariza had 22 points and seven rebounds while Rebano had 21 points, 12 boards, four assists and seven steals to give Tech Mahindra its ninth win in 13 games.