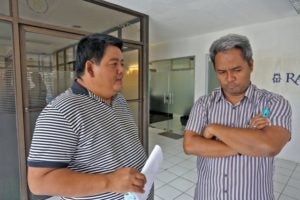 In a five-page decision, Presiding Judge Oscar Andrino of the Branch 5 of the Municipal Trial Courts in Cities (MTCC) found Ayuman not guilty.

The charge stemmed from his alleged refusal to return city-issued vehicles to the city which was then headed by Osmeña in her capacity as acting mayor last May 2016.

At that time, Ayuman was the village chief of Barangay Apas.

Andrino stated on his ruling that the prosecution failed to prove that Ayuman’s intentions were rooted with malice.

“All told, the court finds that the evidence of the prosecution has not successfully established the culpability of the accused as charged in the herein information,” read portions of the court’s decision.

“The records clearly disclose that Ayuman, after getting hold of the Acting Mayor’s memorandum, went through proper and legal channels to seek a reconsideration of (Osmeña’s directive). Besides, when he realized that the request for reconsideration and the Vice Mayor’s letter of clarification had not been favorably acted upon by Acting Mayor Osmeña, he readily acquiesced to the order and immediately caused the return of the vehicle under his administration,” it added.

In a phone interview, Ayuman said he was grateful that the court ruled in his favor and that the truth prevailed.

“Maayo gyud (It’s great). There was no malice, and everything was made in good faith,” said Ayuman.

Sought for comments, Osmeña told reporters that she’s fine with the court’s decision.