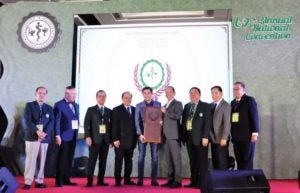 MOST OUTSTANDING HOSPITAL-LEVEL 3 2018. Cebu Doctor’s University Hospital has been recognized among the 2,000-member Philippine Hospital Association (PHA) as the Most Outstanding Hospital-Level 3 for 2018. This will be a big plus for Cebu, which is striving to become a future medical tourism destination in this part of the world. Above, Dr. Potenciano “Yong” S.D. Larrazabal III, CebuDoc Group chairman (5th from left) receives the award from the PHA officials and Health Assistant Secretary Elmer Punzalan during the PHA annual convention at the Fiesta Manila Pavilion on Nov. 14.
contributed photo

AT LEAST 30 South Korean companies are set to establish and operate an assembly plant for farm machinery in Batangas to help local producers modernize their farms.

Agriculture Secretary Emmanuel Piñol said on his Facebook page that he had signed a memorandum of agreement with the Korean Agricultural Machinery Industry Cooperative (Kamico) regarding the proposal.

Kamico plans to put up a research and development center and a training center for farmers and equipment operators, which will be complemented by a 50-hectare demonstration farm where farmers can test the locally assembled machinery.

Kamico President Shin-gil Kim said the assembly plant would be located in Malvar, Batangas, although Piñol said this had yet to be finalized.

Piñol quoted Kim as saying that the 30 companies decided to establish manufacturing facilities in the Philippines “in view of the aggressive mechanization program of the government.