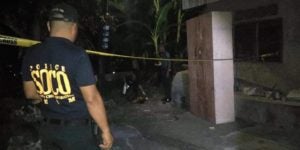 Scene of the Crime Operatives (Soco), cordon off the area where the three suspected drug pushers were killed in Sitio Maghaway Proper, Talisay City. CDN PHOTO/BENJIE B. TALISIC

The families of the three suspected drug personalities killed in Barangay Maghaway, Talisay City strongly denied police claims that there was a buy bust operation conducted on Saturday afternoon.

Lydia Labrador, the wife of Susano Labrador; one of the three persons killed in the alleged shootout with police operatives, said that the police went to her house but her husband was not there when they came.

(He was tending our goats outside our house)

Susano was actually with their grandchildren when the alleged shootout between her husband and the police happened, added Lydia.

She also said that while her husband has an old, rusty gun, it was not with Susano when the police conducted their operation.

Labrador, Warlito Tecson, and Vincent Ceballos were killed in what the police said was a shootout after a buy bust operation in Sitio Proper Maghaway in Barangay Maghaway, Talisay City past 3 p.m. last Saturday.

The subjects of the buy bust operation were Labrador and Ariel Olivar, who remain at large.

The Talisay City police claimed that the suspected drug pushers including the one who escaped, fired first at the police operatives who conducted the buy bust.

But Pompe Tecson, Warlito’s older bother, denied the allegations of a shootout.

He asked how his brother could have shot at the police when Warlito was not carrying a firearm.

He also pointed out that Labrador, Tecson and Ceballos were at least 30 meters away from each other, contrary to the police claim that they were together during the buy bust.

(They were far from each other. They were not together during the alleged buy bust operation)

Pompe said he does not question police operations but they should not kill their subjects.

(When they will conduct an operation they should refrain from shooting their subject they do not fight back. But if the subjects fight back, go on. But this incident? They never shot at the police.)

The Labrador and Tecson family will no longer file a complaint or seek the help of any human rights organization.

(They are already dead. We will just accept it. We are helpless against them so we will just appeal to the police not kill their subjects but just arrest them)