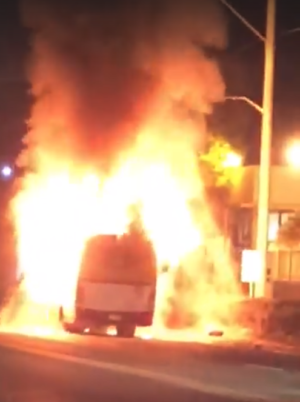 A passenger bus caught fire along the national highway in Barangay Colon, Naga City, south Cebu at 6:50 p.m. on Monday.

The driver and his passengers managed to escape but sustained some injuries, said Chief Insp. Roderick Gonzales, assistant chief of the Naga CIty Police Station.

Investigation revealed that the driver of the bus sensed that something was wrong with the fuse box, prompting him to stop.

He said the fire immediately broke out and spread all over the vehicle.

The bus was travelling from Badian, Cebu to Cebu City.

Read Next
Cimatu to visit Panglao Island on Tuesday