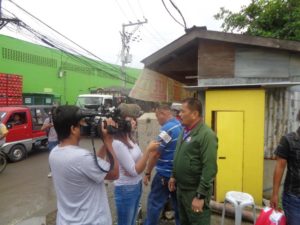 PCSO General Manager Alexander Balutan said the arrested individuals worked for the outlets illegally operated by a firm called Globaltech Mobile Online Corp., which has been holding illegal gambling operations for the past two years without authorization from the PCSO.

“We are going all out to stop the illegal gambling activities throughout the country, to protect our legal gaming products, particularly the Small Town Lottery,” Balutan said, stressing that the agency had terminated Globaltech in 2016 for failing to remit earnings to the government.

Balutan said the raids were conducted from Nov. 20 to 23 in coordination with the NBI Central Visayas regional office (NBI-CEVRO) following complaints from PCSO’s Authorized Agent Corporations (AACs) in Mandaue and Cebu.

“PCSO revenues have been adversely affected by the continued operation of illegal gambling which unfairly competes with our legal gaming products, particularly the STL, and so the agency has to act by stopping the operations of Globalteach nationwide,” Balutan pointed out.

Fraginal said the raids were conducted in 10 barangays in Mandaue City which led to the arrest of 18 Globaltech employees, while 15 barangays in Cebu City with 22 individuals arrested.

According to Balutan, the nabbed individuals will be charged with violating Republic Act 9287, or the Anti- Illegal Numbers Game Law, and RA 10175, or the Cybercrime Law.

The PCSO ordered the filing of illegal gambling cases against the 40 arrested personnel, but 18 of them were able to post bail. The remaining 22 nabbed employees are expected to post bail ranging from P60, 000 to 120,000 each anytime soon for their temporary liberty.

Under Republic Act 9287, the arrested individuals will face imprisonment of six to eight years for their involvement in illegal gambling operations.

The raids in Cebu province here held shortly after PCSO and the NBI shut down on Nov. 14, five Peryahan ng Bayan operations in Quezon City which led to the arrest of 57 bet collectors of Globaltech.

Balutan said the operation of Globaltech has been pronounced illegal by the PCSO in February 2016 after its Deed of Authority was terminated for non-remittance of earnings amounting to more than P100 million.