Three persons shot dead in a span of 6 hours 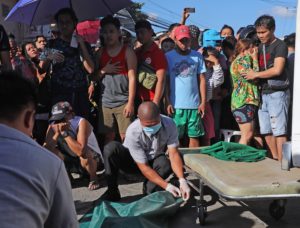 THERE seems to be no end in sight to the bloodshed in our streets.

Three persons, including a fraternity member were killed in separate shooting incidents in the cities of Mandaue and Talisay in a span of just six hours from Tuesday night to Wednesday dawn.

At past 4 a.m. on Wednesday, a 25-year old active member of the Alpha Kappa Rho died on the spot after he was shot by unknown assailants on board a motorcycle at the corner JP Rizal and P. Suico St. Barangay Tabok,
Mandaue City.

SPO2 Allain Carado of the Basak Police Station identified the victim as Kent William Isok, who sustained several gunshot wounds in the head and body.

The suspects it seemed, are really bent on finishing off their target as five empty shells of .45 caliber pistol were recovered from the crime scene.

Witnesses told the police that Isok was walking along the road after eating at a food stall with a friend when two men on board a motorcycle tailed the victim, drove near him, and fired several shots.

The victim’s father, who refused to be named, said he has a possible suspect in the killing of his son. He insisted that his son’s death was not frat related.

He said he will cooperate in the police investigation to help solve the case as he admitted to being a member of the Tau Gamma Phi fraternity.

Police are currently reviewing a copy of the CCTV footage that captured the incident.

The suspect was identified as Eugine Cabando from Barangay San Roque, who sustained gunshot wounds on his body.

According to Police Supt. Marlu Conag, chief of Talisay Police Station, Cabando drew out his gun after sensing he was dealing with police operatives.

Cabando is the ninth suspected drug personality killed in a drug operation in Talisay City since November 23.

‘Masyador’ shot
Meanwhile, at around 10 p.m. on Tuesday, still in Mandaue City, a 42-year old man died on the spot after he was shot in the head by an unidentified person inside a cockfighting arena at SB Cabahug Street, Barangay Ibabao-
Estancia.

Gingco said that nobody was able to identify the male assailant since the crowd scampered to different directions at the sound of gunfire.

Police recovered an empty shell believed to be of a .45 caliber pistol at the crime scene.

Gingco revealed that Reyes was a drug surrenderee in 2016 but has since maintained a clean record.

Street dweller critical
In another shooting incident, a street dweller is in critical condition after he was shot while sleeping at around 3:40 a.m. along Leon Kilat Street, Cebu City

Chief Inspector John Kareen Escober of the Carbon Police Station, identified the victim as a certain “Jhong” who is between 30-35 years-old. He sustained gunshot wounds on his body.

Police said the victim was sleeping in front of the Barangay Pahina Central Hall when the incident happened.

As of 6:36 last night, Escober said that ‘Jhong’ is still in critical condition.

Read Next
City Hall employees to get cash incentives

A teacher surprises her student, throws a virtual birthday celebration

Tulfo: If I win as senator, I will propose bills to protect rights of workers, OFWs, poor families