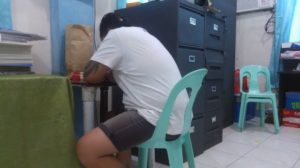 The son of Cebu-based broadcaster Cirse “Choy” Torralba was arrested on Saturday for allegedly pointing a gun at a man and chasing after him with his car at B. Rodriguez Street in Barangay Guadalupe, Cebu City.

According to Chief Inspector Henrix Bancoleta, chief of the San Nicolas Police Station, Mickel Niño Torralba, 30, who was driving a grey Toyota Corola, overtook and blocked the car driven by Concord Deo Fabiliar, who was on board a black Honda Brio Amazon.

After blocking Fabiliar’s car, Torralba got out and allegedly pointed a gun at Fabiliar to coax the victim out of the car.

Bancoleta said that in fear for his life, Fabiliar quickly fled from the scene, which led him to lose control of his car upon turning to V. Rama Street, where the car spun uncontrollably hitting a tree, a parked motorcycle, and a concrete fence before it came to a stop.

Torralba allegedly chased after Fabiliar and before the latter could get out from his car, Torralba intentionally bumped his own car into Fabiliar’s car before the broadcaster son’s vehicle hit a post.

Bancoleta said a .45 caliber pistol was surrendered by a certain Harris Ybañez, a friend of Fabiliar who claimed to have taken the gun from Torralba’s car.

Torralba, who was interviewed at the San Nicolas Police Station’s detention facility on Sunday, told Cebu Daily News that the incident was more than a road rage case and was a deeply rooted problem among him, his common-law wife, and Fabiliar.

According to Torralba, he had a long standing feud with Fabiliar, the details of which he wished to keep private.

Torralba said that when he saw the car of Fabiliar, he sought to face Fabiliar but only to engage him in a talk: “His car is known to me. When I saw his car, I knew immediately it was him. I was angry, I just wanted to talk to him and tell him that what he did badly affected my family.

Torralba denied he pointed a gun at Fabiliar and claimed to only coax him using his fingers. “I did not point a gun at him and I don’t own a gun. I just wanted to talk to him,” he claimed.

Torralba admitted that he did intentionally bump the car of Fabiliar after it hit the concrete fence but he said Fabiliar had already left the car when he hit it.

Choy Torralba, in a text message to CDN on Sunday, said has not talked to his son yet. “But if he violated the law, he has to answer for it. I have provided him a lawyer to help him in his problem,” said the broadcaster.

“I have never lacked in providing him most specifically guidance on proper decorum in his life. He his old enough at the age of 30,” he added.